Every player at Stamford Bridge, more or less, gets a clean slate under the German tactician…but is that good news for the Morocco playmaker?

Unquestionably, a whole lot has changed since Chelsea hosted Tottenham Hotspur at Stamford Bridge in the 1000th game of Roman Abramovic’s ownership of the club last year.

Frank Lampard’s men were eight games into a nine-match unbeaten Premier League run before both sides faced off on November 29, while Jose Mourinho faced his old side at the time looking to extend Spurs’ unbeaten league run to nine.

Both London clubs eventually notched up nine and 11 games without defeat respectively with a draw, but the subsequent decline has been jarring and indicative of how quickly the narrative changes amid pandemic football in the 21st century.

Two wins, as many draws and four defeats have followed the Lilywhites’ seven victories and four stalemates previously, and Chelsea haven’t fared better either: falling to five defeats in their last 10 PL games, seeing both dramatically fall away from title contention and now scrambling to finish in the top four.

The upshot of the West Londoners’ run led to Lampard’s sacking and Thomas Tuchel’s appointment. As has already been witnessed, and is usually the case with managerial changes, the majority of players begin with a clean slate in getting a chance to impress the new man at the helm.

On the other hand, there’s always a risk of previously favoured stars becoming rotational options; a fate which could befall Hakim Ziyech, who’s endured a stop-start life in English football so far.

In fairness, we’re only two games into Tuchel’s 18-month deal at the Bridge, so it’s probably too soon to start noticing patterns in selections and predicting the former Ajax star won’t be a key player under the ex-Borussia Dortmund tactician.

While the 47-year-old isn’t wedded to one formation and is widely regarded as a tactical chameleon, the opening two games have seen him opt for a 3-4-3, although Callum Hudson-Odoi’s wing-back role has been disputed by some. This is different from the jettisoned Lampard, who favoured a 4-3-3 for the majority of this season before his departure in January.

Ziyech tended to operate as a wide playmaker on the right flank in attack, relying on non-stop overlapping runs from the right-back — mostly Reece James — due to his own limitations in operating as a winger tasked to beat his marker repeatedly.

Against Wolverhampton Wanderers, Hudson-Odoi sticking to his wide right berth due to the visitors’ overly negative approach meant the North African had that option at hand until his 83rd-minute substitution.

It finished goalless at the Bridge, but the ex-Ajax playmaker registered a game-high three key passes, along with the right wing-back, and was involved in seven shot-creating actions—no player on either side had more. Significantly, it was the Moroccan’s best league game statistically since destroying Sheffield United in that glowing home performance in early November.

Ziyech’s impeccable showing vs Sheffield United was just a tip of the iceberg with the playmaker showing he’ll be central to Lampard’s Chelsea evolution.

While there were clear differences in both displays — the maverick created three big chances from six key passes vs the Blades as opposed to zero clear-cut opportunities against Wolves — it was auspicious that the 27-year-old benefitted from Chelsea’s willingness to play more between the lines against Nuno Espirito Santo’s team.

Frustratingly, though, he missed the 2-0 success over Burnley as a precaution, revealed by Tuchel before kick-off on Sunday.

“[Ziyech] has been in a bit of overload in the last five weeks so he has a bit of a risk of getting injured if he plays more than say 30 minutes,” the ex-Dortmund boss explained to BT Sport. “For that, we decided to take a break now to go out of the risk zone.”

The consequence of yet another injury or fitness concern saw Mason Mount not only replace the playmaker in that position but equally play brilliantly in the deserved success; linking up with Hudson-Odoi with probably more regularity than Ziyech did a few days earlier.

While this can be put down to players simply understanding the requirements to play under their new boss after extra days of training at Cobham, the threat that now exists for a starting berth suggests the former Ajax star won’t be guaranteed a place in Tuchel’s best XI.

In the present 3-4-3, Mount is unlikely to feature in a midfield pairing, rather, expected to operate higher up the pitch as one of the three attackers. Despite the unfounded criticism the Englishman endured under Lampard, the club academy graduate had been one of the side’s best performers in midfield and is likely to play a marked role under Tuchel as well.

The England international was notably vital to a tactical switch at half-time against the Clarets which saw him moved from that inside-right position in the 3-4-3 to operating in the hole in a changed 3-4-1-2, with Christian Pulisic and Timo Werner up front.

His tactical dexterity was vital under Lampard, who initially moved him around before consistently utilising him as a free 8 in a midfield three, and ought to be even more important under the reputed tactical chameleon.

This isn’t necessarily to Ziyech’s benefit, owing to his skill set and exclusive proficiency as a playmaker who drifts infield to cross, shoot or find the overlapping full-back or wing-back. While he could be a beneficiary in Tuchel’s existing 3-4-3, his somewhat one-dimensional nature, ironically a much-needed facet under Lampard, may put him at a disadvantage down the road under the German.

A fortnight ago, the Moroccan was likely a shoo-in to start at the Tottenham Hotspur Stadium but the recent changes at Chelsea indicate it’s not as odds-on as it seemed before Tuchel’s arrival. Indeed, the next few weeks and months in West London will attract strong attention as patterns begin to develop under the former Paris-Saint Germain boss.

How Ziyech fits into all that, however, will keep everyone guessing for a while.

Wed Feb 3 , 2021
The youngsters have made an instant impact since arriving at the Madrid side at the start of January Getafe sporting director Angel Martin has revealed his side would be keen to retain the services of on-loan duo Carles Alena and Takefusa Kubo, although he admitted that securing either player’s signature would be […] 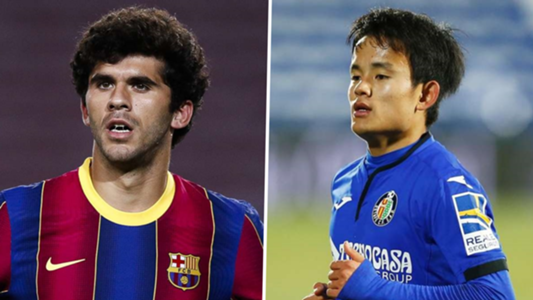