Zinedine Zidane is at a loss to explain the injury crisis that has struck Real Madrid after seeing right-back Dani Carvajal forced off in the first half of Sunday’s 2-0 win against Valencia.

Carvajal lasted less than 30 minutes as he pulled up with a knee problem after being struck by the ball.

Zidane is perplexed by the sudden increase in fitness issues in his squad and hopes Carvajal is not kept out for long.

“I don’t understand. There are a lot of injuries, I’m worried. When I lose a player, as a coach it bothers me. It’s a relapse,” Zidane told reporters.

“I’m sorry for Carva. He played 25 minutes very well and I’m upset because he’s very important to us.

“But I can’t explain the reasoning [behind the injury problems] to you. As a coach, having injuries is the worst. They’ve come back to hurt us again.

“I only hope that [Carvajal’s injury] is a small one. We’ll see what the injury is and for how long he’ll be out for.”

Toni Kroos, who netted the home side’s second goal after Karim Benzema gave them an early lead, is also concerned about the problems facing the squad as they look to catch up with La Liga leaders Atletico Madrid.

“We’re very worried about all the injuries and we don’t know if winning all the remaining games will be enough to win the league, but we’ll give our all,” he said.

Madrid have won three matches in a row and now sit second in the table. They trail city rivals Atletico by five points, though Diego Simeone’s side have two games in hand. Barcelona, meanwhile, are three behind Zidane’s men and have one game in hand.

Desperate to increase pressure on Atletico and with a Champions League clash against Atalanta coming up on February 24, the coach will be desperate to see some of his stars return from injury very soon.

“There are many injuries, but we will continue. I hope our players recover,” the Frenchman added.

“We are going to continue and we are not going to look at the other teams. I am happy for my players and we were very good defensively.

“With the ball we made very good plays, especially in the first half.”

Sun Feb 14 , 2021
Lazio have also made two changes to their side from their win over Cagliari in their last outing. Patric and Hoedt start in the back three to replace Musacchio and Radu, with the latter being a late withdrawal in the warm-up. Inter have made one change to their side from […] 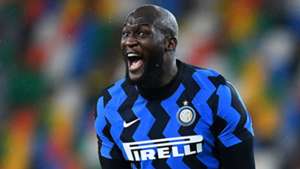