It is not easy to put up a dominant show against teams like Mumbai City FC and FC Goa who love to keep possession of the ball and attack. But East Bengal successfully managed to outplay Mumbai City in one half in their last game and then controlled proceedings for the majority of the match against the Gaurs on Friday.

For a team who had the worst possible start to their maiden campaign in the Indian Super League (ISL), losing four out of their first five matches, East Bengal have shown increased confidence in the past one month.

The Red and Golds are a much confident side and look fearless in their approach. They love to control a match at their will and look fluent while building the play from the back. With Bright Enobakhare in their ranks now, the club seems to carry a greater attacking threat.

Yet win seems to elude East Bengal as they are not able to convert the chances they are creating. A major reason for their profligacy up front has been a lack of a proper number nine in their squad.

On Friday, Fowler fielded his team in a 3-4-1-2 formation where he deployed Anthony Pilkington and Jeje Lalpekhlua as the strikers and Enobakhare operating in the hole. With all due to respect to Pilkington, who has been one of East Bengal’s best foreign recruits this season, the Irish international is not centre forward by trade.

All his life Pilkington has operated on the flanks and that shows in his game. The attacker looks much comfortable when he falls back in the midfield to win balls and create chances but when it comes to conversion in front of the goal, Pilkington has struggled.

The former Norwich City man has managed to score just one goal in 12 matches this season. The Red and Golds had a golden opportunity to take an early lead and put Goa under pressure when Narayan Das went down inside the box after a challenge from Mohammed Ali but Pilkington’s spot-kick went wide.

Jeje Lalpekhlua, on the other hand, is far from his best right now and except for a couple of quality passes, did not do much inside the opposition’s box. Fowler tried to field youngster Harmanpreet Singh in the second half and the 19-year-old showed a lot of exuberance but could not do the needful.

It must also be noted that East Bengal were playing their seventh match of a tough run of eight matches in 29 days and that fatigue was bound to show. However, they have lost just once during this run, which is a positive.

FC Goa were without their two foreign central defenders (Ivan Gonzalez and James Donachie) due to injury and suspension. Thus, with an all-Indian defence, the Gaurs did not want to take too many risks and leave their backline exposed. As a result, they happily stood back and only tried to raid the East Bengal box on counters.

The Gaurs had taken the lead against the run of play in the first half and held on to it until the 65th minute when their captain Edu Bedia got sent off. The Spaniard unnecessarily committed a foul on Pilkington which invited a second booking of the night.

Bedia is a vital cog in Goa’s midfield and missing him against an in-form team NorthEast United is a major loss for the Gaurs. The Spaniard, being a senior player and the captain of the side, should have more cautious as the team is already missing the services of many important players like Brandon Fernandes and James Donachie.

Win wasn’t an absolute necessity for the Gaurs who are happily sitting in the top half of the league table and were thus content with a point. East Bengal, on the other hand, need as many wins as possible to close in on a play-offs berth.

Sajad Hussain: From dark alleys and narrow streets to playing for Indian Arrows

Sat Jan 30 , 2021
The Indian Arrows left-back is ready to scale any height to shine like his idol Roberto Carlos… Sajad Hussain Parray hails from Gund Hassi Bhat, a hamlet on the outskirts of Srinagar. Although Kashmir has produced quite a few footballers and coaches over the decades, this has remained one of the football […] 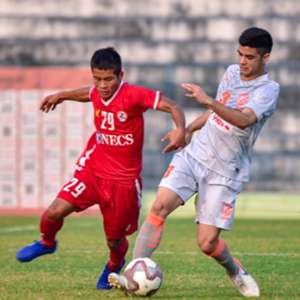