Thomas Tuchel is set to replace Frank Lampard as Chelsea manager after Roman Abramovich made the “difficult decision” to sack the Blues legend following a disappointing run of form.

The German head coach will be the 13th different boss at Stamford Bridge since the Russian billionaire took over the Premier League club in 2003 and only time will tell if he is an unlucky or lucky number.

He will join Chelsea after a short period of unemployment, having been relieved of his duties at Paris Saint-Germain just before the new year.

So, who is the man taking the reins from Lampard in west London and what is his managerial record like? Goal brings you everything you need to know.

Who is Thomas Tuchel?

Tuchel is a German football manager, who has served as head coach at Borussia Dortmund and PSG, among other clubs.

Born on August 29, 1973, Tuchel is a former footballer who lists Augsburg, Stuttgarter Kickers and SSV Ulm as clubs he plied his trade with, but his career as a player was relatively short-lived.

Forced to retire at the age of 25 due to chronic knee issues, the ex-defender quickly moved into coaching and worked with Stuttgart’s youth teams before taking over as manager of Augsburg’s second team.

His first big break as a coach came in 2009 when he replaced Jurgen Klopp as manager of Mainz in the Bundesliga and, six years later, he replaced Klopp again when he was appointed Dortmund boss in 2015.

Tuchel’s work with Dortmund earned him plenty of recognition across Europe as one of the brightest minds in coaching and he was hired as PSG head coach in 2018, spending two-and-a-half-years at the helm.

Tuchel spent two-and-a-half trophy-laden years at PSG and his record with the Ligue 1 outfit is impressive.

He managed the French capital club for 127 matches, winning 95 of those and losing just 19 overall – meaning he boasts a win percentage of 74.8 per cent from his time there.

With players such as Neymar, Edinson Cavani and Kylian Mbappe at his disposal, Tuchel ensured that PSG were a free-scoring side, with 337 goals scored across his tenure.

Six trophies in two and a half years 🤩

Took the club to their first ever Champions League final 👏 pic.twitter.com/KBr8riTcwg

As well as that, he brought the club closest to Champions League glory, steering them all the way to the final of the competition in 2019-20, where they ultimately lost to Bayern Munich.

When Tuchel was sacked as PSG manager in December 2020, his side trailed Lyon and Lille in the league by a single point.

Prior to his dismissal, he vented his frustration at what he considered “extreme expectations” at the club and a lack of appreciation for his achievements.

“We were one game from winning the Champions League,” he told SPORT1 in December.

“We never had the feeling we had convinced people and that they recognised our achievement. It sometimes makes you a little sad and angry.

“There are definitely extreme expectations here. You get the feeling the appreciation for what we do, particularly in the league, is not there as it is at, say, Bayern Munich.

“They always say, ‘They have [Angel] Di Maria, [Kylian] Mbappe, Neymar. Of course they win against Bordeaux – that’s not an achievement.’

“And with that there is no appreciation for our discipline, sustained play, the intensity of our play.

“It’s a shame for the players because very serious team performances can be completely wiped out.”

Tuchel spent a similar amount of time as Borussia Dortmund head coach and, while he was unable to upset Bayern Munich’s dominance in the Bundesliga, his record was still commendable.

He steered Dortmund to victory in 67 out of 107 games, suffering defeat on 17 occasions, posting an overall win percentage of 62.6%.

In his two seasons at Signal Iduna Park, Tuchel won a single trophy – the DFB Pokal in 2017, when they beat Eintracht Frankfurt 2-1 in the final.

He finished second in the Bundesliga in his first season, which was a solid achievement given that he had to rouse a team that had finished seventh the season before and was reeling from the departure of Jurgen Klopp. He also suffered penalty shootout heartache in the DFB Pokal final that season against Bayern Munich.

Performances certainly dipped somewhat in the following campaign and Dortmund could only manage a third-place finish in Tuchel’s second term as head coach, with RB Leipzig finishing three points ahead of them in second.

He never quite cracked Europe with Dortmund, but reached the quarter-finals of both the Europa League and Champions League.

At Dortmund, Tuchel got the best of out Pierre Emerick Aubameyang, who became one of the best strikers in Europe on his watch, while also bringing through players such as Christian Pulisic and Ousmane Dembele.

Tuchel is often likened to legendary German coach Jurgen Klopp due to the fact that he has been hired as a direct replacement for him on two separate occasions.

However, while there are indeed similarities, his football philosophy and personality is very much his own.

Tactically, Tuchel has made use of the sort of gegenpressing approach that became synonymous with Klopp’s ‘Heavy Metal Football’, but he is arguably a lot more pragmatic.

As well as making use of 4-3-3 at both Dortmund and PSG, Tuchel has also deployed the 3-5-2 formation (or 5-3-2, depending on defensive mentality), with wide forward play complemented by flying full-backs.

Man-marking is a trait of Tuchel teams, with highly energetic midfielders put to work in order quickly close down opponents, in turn, allowing the attackers more freedom to roam in the final third.

Like Klopp, Tuchel gives the appearance of being an affectionate coach, routinely greeting his players with kisses and warm embraces after games. Interestingly, however, he also has a reputation – fair or not – for being cold and cerebral.

He is arguably much more academic and methodical in his preparations and has been given the nickname ‘The Professor’ for his meticulousness.

Indeed, Tuchel is headstrong and is not shy about expressing his views on a range of matters, including his relationships with those who hold the purse strings.

Mon Jan 25 , 2021
Manchester City manager Pep Guardiola has described his West Brom counterpart Sam Allardyce as a genius. The two teams lock horns in the Premier League on Tuesday, and Guardiola is expecting a tough test for his side who can go top of the table with a win. In stark contrast, […] 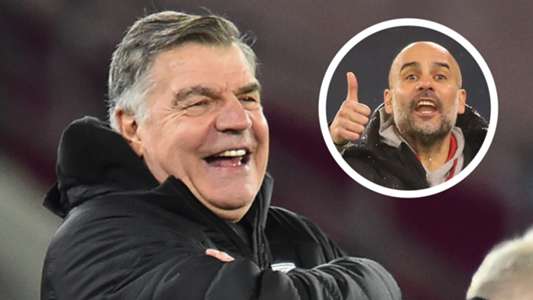