The striker has been a regular in the Red Devils team since breaking through in 2016, but how lucrative has his rise to stardom been?

Manchester United forward Marcus Rashford burst onto the scene in 2016 and he is now considered one of England’s best young players, with an abundance of potential.

His stock sky-rocketed following his sudden arrival into the team at Old Trafford and his performances have earned him a number of new deals with the club.

Rashford can already say he has won the League Cup, the FA Cup and the Europa League, as well as the Community Shield, not to mention the fact that he has played in a World Cup semi-final.

So how much has his brief career been worth so far? Goal takes a look at how lucrative Rashford’s football journey has been.

British finance magazine Spear’s estimates Rashford’s net worth to be around £65 million ($80m), which is quite impressive, even if it seems a tad unrealistic considering his youth.

A clearer picture will undoubtedly emerge in the coming years as he earns more money through new, more lucrative, contracts, but right now he appears to be doing quite well.

Given that Rashford is only at the beginning of his career – he has only been in the United first-team for around three years – he has not had the time required to amass such exquisite wealth.

Aside from his salary at Man United, details of his wealth are not exactly clear, but his various endorsements, particularly with sportswear giants Nike, are sure to be worth plenty of money.

How much does Marcus Rashford earn?

The deal runs until 2023 and is a mammoth increase on his previous package, which saw him earning £20,000 a week.

With a salary of £200,000 a week, Rashford would be earning over £10m per year for his efforts before bonuses and other play-related incentives are taken into account.

You can see an approximate breakdown of how much Rashford earns below.

What sponsorship deals does Marcus Rashford have?

Rashford is a Nike athlete and, since his breakthrough at Old Trafford, he has featured in a number of the sportswear brand’s promotional campaigns.

Along with Tottenham’s Harry Kane and Manchester City’s Raheem Sterling, he is one of England’s top Nike footballers and his stature with the brand is perhaps illustrated by the fact that he has rubbed shoulders with the likes of Robert Lewandowski, Gonzalo Higuain and Edinson Cavani in advertisements.

As well as Nike, Rashford is a ‘McDonald’s Football Ambassador’ and in December 2017 he took part in a promotion that saw him return to his former club, Fletcher Moss Rangers to distribute brand new kits.

He has also worked closely with EA Sports in the promotion of their FIFA video game series.

What businesses does Marcus Rashford have?

Rashford is only at the beginning of his career in football, so he can be forgiven if long-term business interests are not to the front of his thoughts right now.

However, like many footballers, he does appear to have set up a property business, suggesting that he will invest some of his earnings into that industry.

Of course, there is still plenty of time for him to follow in the footsteps of other footballers by venturing further into the realm of business.

What charity work does Marcus Rashford do?

Rashford has used his status as one of England and Manchester United’s biggest stars to highlight many social issues in an effort to effect positive change in society.

In 2020, the striker penned an open letter to the British parliament urging politicians to continue a free meal scheme for vulnerable children through the summer in light of the coronavirus pandemic. While it was initially rebuffed, pressure mounted on the UK government to such a degree that Prime Minister Boris Johnson performed a u-turn.

Rashford was extremely active in promoting various charities during the coronavirus pandemic of 2020, including foodbank services Fare Share and Co-op, as well as being part of the Players Together initiative, which donated money to the NHS.

He has long taken an interest in helping people who are homeless, working with Selfridges on their ‘In the Box’ Christmas campaign and has been to the fore in using his voice against racism.

How many social media followers does Marcus Rashford have?

Rashford’s social media presence is formidable for a player of his age, but it is probably not surprising considering that he is playing for one of the biggest clubs in the world.

The England international has over 8.5 million followers on Instagram, a platform that he updates regularly, giving an insight into his lifestyle; which appears to include plenty of social time with team-mate Jesse Lingard.

Rashford has around 3 million followers on Twitter and his Facebook page is liked by over a million people.

Wed Jun 17 , 2020
Date published: Wednesday 17th June 2020 11:30 Lucas Radebe says the Premier League can play a major role in the ‘Black Lives Matter’ movement ahead of its return on Wednesday evening. Aston Villa host Sheffield United in the first game back after the season suspension, before Arsenal travel to Manchester […] 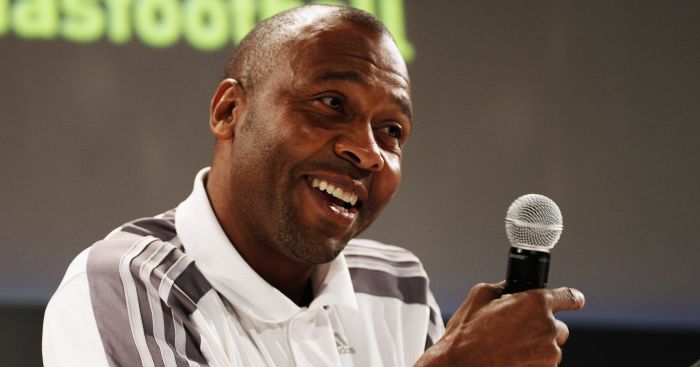