The former Blues striker prefers to see a USMNT star operate on the left flank, with a German forward still searching for a spark in England

Timo Werner is presenting Chelsea and Christian Pulisic with a problem, claims Tony Cascarino, with the German forward considered to need an Emile Heskey-type player alongside him in order to perform at his full potential.

The Blues invested £47.5 million ($65m) in a proven goalscorer during the summer of 2021, with a prolific presence snapped up from RB Leipzig.

Werner offered early encouragement in English football as he made his way to eight goals for the season, but 11 games have come and gone since he last found the target.

Frank Lampard has looked to move the 24-year-old around in an effort to find his best position, with central and wide attacking berths filled.

Cascarino believes that the jet-heeled frontman needs a physical presence to lead the line with him if he is to fire down the middle, while a role on the left is stunting the progress that had been made by United States international Pulisic.

“It’s a tricky one, because I’ve seen a lot of Werner and when he was at Leipzig he played alongside [Yussuf] Poulsen who is a big centre-forward, and he played off the left of him and thrived,” former Blues striker Cascarino told talkSPORT.

“It’s a bit like Michael Owen; Michael Owen without Emile Heskey was never going to be the same player.

“Michael was blisteringly quick but had not the greatest of touches, but he always fired goals when he had a big lad beside him to take the pressure off him.

“Werner is exactly the same to me; he is blisteringly quick, his touch is not exceptional, he’s technically not bad but not great… he can’t play centre-forward on his own.

“He just can’t, because he can’t lead a line or bring players into play. He has to play off the left side of someone.

“The surprising thing for me on the substitution was when Giroud came off [against Villa], you have to put Tammy Abraham on if you are going to put Werner on, because he has to play off the left side.

“The problem Frank has is that Pulisic was probably Chelsea’s most dangerous forward and he looked very lively and always wanted to get on the left. Pulisic is a better left-sided player than Werner in the way Chelsea play.

“It’s one of Frank’s biggest challenges he has got over the next few games.”

Chelsea, who have taken just four points from their last five Premier League games, need to find a find a spark from somewhere heading into their first outing of 2021 against Manchester City on Sunday.

Fri Jan 1 , 2021
The Spanish giants secured the services of the Super Falcons forward from her Norwegian Toppserien outfit Rasheedat Ajibade has joined former Spanish champions Atletico Madrid on a two-year deal from Norwegian outfit Avaldsnes. Ajibade arrived at the Spanish club – her second move in Europe – after her contract with […] 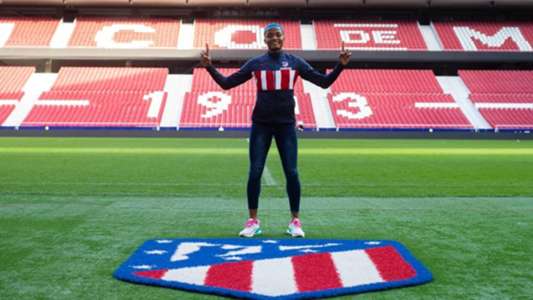