The Norwegian manager was pleased with his side’s latest win in Europe, but still sees plenty of room for improvement

Ole Gunnar Solskjaer has insisted that Manchester United are still a “work in progress” after their comprehensive victory over Real Sociedad.

United put one foot in the last-16 of the Europa League by thrashing Sociedad 4-0 in a round of 32 first leg encounter at the Juventus Stadium in Turin on Thursday night.

The Red Devils bounced back from a disappointing draw at West Brom in the Premier League with a superb attacking display against the La Liga outfit, but Solskjaer insists his team are still “learning” amid an up-and-down season.

“We deserved to win but maybe not by four goals. On a night like this when we find spaces we can be a dangerous team.

“We had to defend well, they have some terrific players up front and we earned the right to counter-attack quickly. They opened up and we got the spaces we wanted.

“Every team attacks you, it’s about finding the moments to find the space. We are a work in progress, we are learning and some games we have not been able to win lately.”

How did United beat Sociedad?

The Red Devils found the breakthrough against Imanol Alguacil’s side with just 27 minutes of the clock, as Fernandes capitalised on a mix-up in the Sociedad defence to fire into an empty net.

The Portuguese doubled his account just before the hour mark, producing an expert finish after being set up by Daniel James, and United continued to apply pressure on the counter-attack thereafter.

Marcus Rashford netted his 17th goal of the season in the 64th minute to put Solskjaer’s men out of sight before James rounded off the scoring in stoppage time, leaving Sociedad with a mountain to climb in the second leg at Old Trafford on February 25.

The fixture list will start piling up for United once again after the resumption of European competition, with Premier League and FA Cup honours also still up for grabs between now and the end of the season.

The Red Devils title charge has faltered of late and they are now in danger of being dragged into the battle for a top-four finish, but winning the Europa League would be safety net for them with regards to sealing qualification for next season’s Champions League.

Solskjaer is bidding to bring the club’s four-year wait for major silverware to a close come May, with a home fixture against Newcastle up next in the top flight this weekend.

Thu Feb 18 , 2021
The Nigerian winger found the back of the net to help his side secure victory against the Black-Greens at Krasnodar Stadium Iyayi Atiemwen was on the scoresheet as Dinamo Zagreb secured a 3-2 win over FC Krasnodar in the first leg Round of 32 of the Europa League game on […] 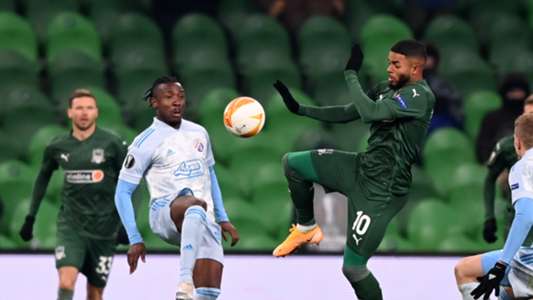