Marcus Rashford enjoyed every moment of Manchester United’s 9-0 win over Southampton on Tuesday night as he said the Red Devils were determined not to take the foot off the gas.

Rashford’s 25th-minute strike contributed to an uplifting return to form for a Red Devils side had dropped points to Sheffield United and Arsenal.

Southampton were made vulnerable by a red card shown to Alexandre Jankewitz in the opening two minutes for a high challenge on Scott McTominay. Jan Bednarek was later sent off in the 86th minute, reducing the Saints to nine men before full-time.

“It’s always good to score lots of goals and we’re happy, it’s three points we have needed,” Rashford told BT Sport of the ruthless showing. “We dropped some points in the last few games and needed to get back to winning ways which we’ve done.

“We just needed to be as simple as possible, keep moving, be positive. It’s easy to take your foot off the gas but we didn’t want to do that we went out in the second half the same as the first. The first half set the tone for us but it’s about keeping a positive attitude and keep scoring goals.”

Rashford achieved a mark of personal excellence as part of the runway display from United, passing Eric Cantona on the club’s goalscoring list with his first-half effort.

But the forward wanted to focus on the group performance more than his 83rd career goal for the Red Devils.

“[Eric Cantona] was a top player who has done so much for this club so I’m pleased but for me I just want to score more goals and help the team,” Rashford said.

Rashford was similarly disinterested in the Premier League table.

“We haven’t looked at Liverpool really,” he said. “We are still improving and we need to focus on ourselves We’re not a ready made team but we have to just keep improving and working on our goals.”

Rashford was joined on the scoresheet by McTominay, Aaron Wan-Bissaka, Edinson Cavani, Anthony Martial, Bruno Fernandes and Daniel James. Bednarek scored an own goal before being dismissed.

Wed Feb 3 , 2021
The Switzerland youth international lasted just two minutes on his first Premier League start Southampton manager Ralph Hasenhuttl did not hide his displeasure with Alexandre Jankewitz after the 19-year-old was sent off for a horror challenge just two minutes into Tuesday’s match at Manchester United. Jankewitz got his leg up […] 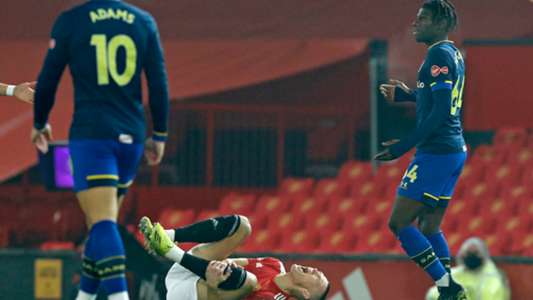