Vihiga United head coach Sammy Okoth has stated he was sure his side will get maximum points against Gor Mahia if they manage to frustrate them.

The financially troubled side managed to get maximum points against the reigning Football Kenya Federation Premier League champions after recording a 1-0 win at Kasarani Stadium on Saturday.

Despite dominating the game, K’Ogalo failed to break down their visitors’ defence, and with five minutes to go, Denis Wafula managed to get the ball in the back of the net to hand his team their second win of the season.

“I have been studying how Gor Mahia are playing this season and we prepared well for the match,” Okoth told Goal on Sunday.

“Yes, Gor Mahia dominated, but we denied them spaces to be comfortable. We had a plan of frustrating them and I am glad our objective was achieved since they did not break our defence and we kept a clean sheet.

“We finally got them late into the game and scored the winning goal.”

The former Zoo FC coach believes the win is what they needed to boost their confidence ahead of their forthcoming assignments.

“We have been having off-pitch issues that are financially related, and during times like these the players need something to boost their confidence and morale,” Okoth continued.

“The win against one of the top teams in the country is a plus to my team because it has pushed our confidence levels to another point. It was a deserved win for us.”

Okoth has further revealed his target for the team in the ongoing 2020/21 season.

“It is not good to be fighting relegation because it means a lot of stress especially in the latter stages of the season,” he continued.

“This time around, we are going for a top 10 finish. It is possible for us; if we put up a positive fight and get good results consistently, we will achieve our target. We have good players who can help us finish in the desired position.”

Vihiga’s win put them in the 14th position with eight points from nine games, coming from two wins, as many draws, and five losses.

Sun Jan 24 , 2021
The Nigerian descent came off the bench to seal the Hammers’ big win on his maiden outing for the first-team Oladapo Afolayan has described his goalscoring debut for West Ham United in their 4-0 FA Cup win over Doncaster Rovers as a reward for the hard work he has put […] 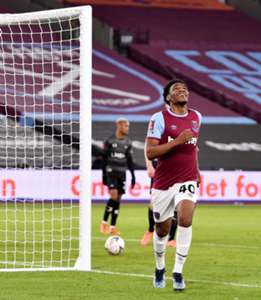