Chennaiyin’s hopes of making it to the playoffs in the 2020-21 Indian Super League came crashing down as they dropped points against FC Goa in a 2-2 draw on Saturday.

Both the head coaches had similar tales to tell after the game as the Machans failed to hold on to their lead twice in the game and failed to put the game to bed once again. The Gaurs, one the other hand, had multiple chances of their own to take the lead but once against left it late to register their sixth draw in a row.

These two teams have now faced each other 19 times and there has never been a goalless draw. Saturday’s result is only the second game to end in a draw. Considering the context in which the game took place, it was Goa’s point to earn and Chennaiyin’s points to be binned, just like how they have been wasting chances throughout the season.

The Machans once again showcased their inability to control games and convert chances. Goa gifted them their lead on both occasions and yet there was no conviction among players that they had full control of the pitch at any point in the game.

Jakub Sylvester collected Reagan Singh’s pass from the right flank and turned well inside the box to beat a crowd of Goa players with his footwork and a bit of luck with deflections before finding the net. It came as a shock for Goa who had more of the ball at the start of the game but it took them just six minutes to find an equaliser.

The impressive Alberto Noguera released Jesuraj into plenty of space down the right flank and the winger’s cross into the box was met by the head of Igor Angulo. The striker’s header hit Eli Sabia’s arm and the referee pointed to the spot. Angulo found the net with ease to restore parity.

Chennaiyin piled pressure on Goa to get their lead back and had two great chances to score just before the break. Jakub managed to get in behind the Goa defence, get into the box and with just the keeper to beat, hit the post with his effort from close range. New signing Manuel Lanzarote, who was once again easily marked out of most of the game, found himself in plenty of space inside the box at the stroke of half-time but he blasted his effort over the bar, again from close-range.

While it was Goa that started the second half with much more vigour, it was Chennaiyin that scored first, somewhat against the run of play. Reagan’s delivery into the box from the right flank was once again threatening. Goalkeeper Dheeraj and defender Muhammad Ali had a brainfade inside the box as the cross came in as both of them missed the ball completely to allow Lallianzuala Chhangte accept his Valentines Day gift and slot home his side’s second goal of the night.

That should have been the last goal in the game. That was Chennaiyin’s cue to take control and see the game to the end. After Goa brought on late-goal specialist Ishan Pandita in the 66th minute, Csaba Laszlo made two changes – Isma Goncalves and Deepak Tangri came on – to keep his team organized.

As Laszlo pointed out after the game, there was a lack of aggression from his team to deny Pandita who get in behind the defence to latch onto a ball by Noguera and finish emphatically to score his fourth goal of the season without having started a single game for the Gaurs.

After the game, the Chennaiyin head coach had said, “I told the new players who came in to keep Goa away from the goal and make tactical fouls in the middle. This is why I am angry and disappointed. Even before the goal, we had the chance to stop them with a tactical foul twice. It is part of the game (and needed) to get results.”

Chennaiyin’s season has been a story of missed chances and they will now hope to end it on a high. Goa are still the in the race for the playoffs and a point is better than a defeat but when a team registers their sixth draw in a row, it is a concern.

Sun Feb 14 , 2021
The Ghanaian took to the pitch for the first time since January 10 as the former West Ham forward inspired the Lancers to three points  Ghana international Mohammed Kudus made a return to action for Ajax after a one-month hiatus as Cote d’Ivoire striker Sebastien Haller scored and set up […] 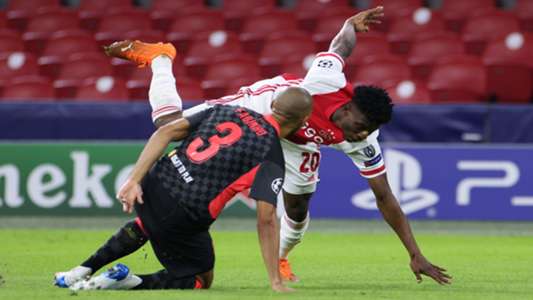