Equatorial Guinea started their 2021 Turkish Women’s Cup campaign on a poor note after a 5-0 defeat to Uzbekistan on Wednesday.

The Nzalang Nacional were assembling for the first time since their Central Africa regional success in 2020 as they gear up for next year’s African Women’s Cup of Nations in Morocco.

On the part of the Central Asian side, Bakhrom Norsafarov’s outfit are featuring for the second time in the invitational tournament in the build-up to the Asian Women’s Cup in India next year.

At the Emir Sports Complex, Uzbekistan made a bright start to the contest, although they only found a breakthrough in the 21st minute through Sevinch forward Nilufar Kudratova’s strike.

Two minutes later, the Asians piled more up pressure on the former African queens and Maftuna Shoyimova doubled the lead before Kudratova grabbed her brace in the 25th minute of the encounter.

Diyora Xabibullayeva netted the fourth four minutes later for Uzbekistan to compound the woes of the Central Africa champions.

After the break, Jean-Paul Mpila could not steer his side to a fightback as Norsafarov’s side grabbed a fifth of the game in the 54th minute courtesy of Lianna Narbekova to seal the big win.

The result has left the West Africans bottom of the table and they will be hoping for better fortunes against CSKA Moscow in their next game on Saturday.

The Black Queens will afterwards take on Nigeria, the other African side at the competition, for the last day showdown on February 23.

Wed Feb 17 , 2021
5′ The visitors seem to be trying to feed the ball over the top of the Sevilla defence for Haaland to run onto, for him to sprint onto the end of. However, so far, they haven’t been able to time their passes quite right. 3′ Decent start by Dortmund, they […] 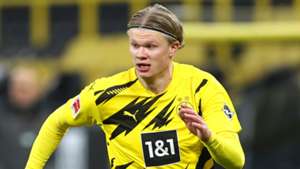