Daniil Medvedev is known for his all-around baseline game. The Russian frustrates opponents with his counter-punching, while stepping into the court when given the opportunity to go on offence. But what is often overlooked in the 24-year-old’s tennis is his serve, which has been as impressive as ever at this US Open.

The third seed, who is into the semi-finals against Dominic Thiem, has not trailed by a break throughout the tournament, and he has only been broken three times in 68 service games. In his quarter-final against Andrey Rublev, Medvedev did not face one break point.

“[The] serve is so important in tennis. When you serve like I did today, it helps a lot,” Medvedev said. “You just know that like this you can focus more on your return games without having to face a break point during all the match.”

Medvedev is not like John Isner, Reilly Opelka or any of the players who consistently top the aces leaderboard. He typically uses his serve to position himself well in points and backs it up with his all-around game to find success from there.

“For me, the best way [to win a point on serve] is to hit an ace, but of course you will not do it all the time. It’s really important, if you don’t make an ace, to give yourself position to be in hold of the point,” Medvedev said. “That’s what [the] serve stays for. And even [on the] second serve you don’t want to be under pressure all the time.

“That’s, for example, the toughest challenge against guys like Roger and Novak, because no matter how you serve your second serve they are going to pressure you. You feel tough about it. So that’s what everybody is trying to do. I try to get [an] advantage with the serve.”

“In general he has a really good serve. He serves any direction he wants and he feels all of them really well,” Rublev said. “He’s quite [tall]. It’s normal that he has a good serve.”

The 6’6” righty serving well is not a new phenomenon, though. He has long stymied even some of the world’s best returners. In the final of the 2018 Rakuten Japan Open Tennis Championships, Medvedev only lost five service points in upsetting home favourite Kei Nishikori for the title. But he is still always tinkering to make it better.

On Wednesday’s ESPN broadcast, analysts discussed how Medvedev’s service toss is not as widespread as it was a couple of years ago. Back then, he would sometimes give away his slice serve by tossing the ball far off to the right, for example.

“We didn’t work on it precisely, the toss. But that’s something that when I was a junior, I was tossing too much in front and too low for my size,” Medvedev said. “Every time we work on my serve with my coach, every serve you do, he tries to adjust, maybe this one push more with the legs, this one toss higher. That’s how in practice it makes you better.

“Of course during the match I don’t think at all about the toss. I just think, ‘Okay, where [should] I serve?’ And I just go for it. It’s more during practice. And not specifically the toss, but everything together.”

Medvedev’s semi-final against Thiem promises to be a gripping baseline duel between a master of relentless offence in Thiem against one of the best players in the world at absorbing aggression in Medvedev. But keep an eye on the Russian’s serve. If that continues to fire, it could make all the difference inside Arthur Ashe Stadium.

Namungo FC's Bigirimana: I am preparing to win the Golden Boot

Thu Sep 10 , 2020
The Burundi striker, who scored 10 goals last season, believes he has what it takes to be the best in the current campaign Namungo FC striker Blaise Bigirimana has stated he wants to take the Golden Boot from Simba SC forward Meddie Kagere. The Rwanda attacker has been dominating for […] 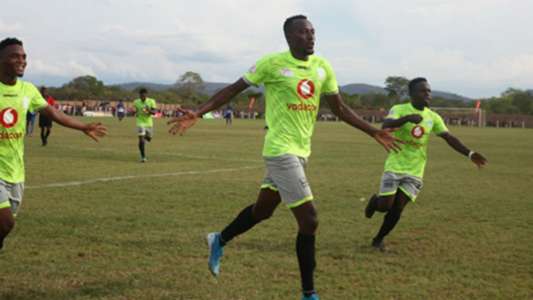