Shabab Al-Ahli booked a spot in the final of the UAE Arabian Gulf Cup along with Al-Nasr after defeating Al-Wasl 3-1 at Rashid Stadium on Tuesday. They won by an aggregate score of 5-1 over the two legs.

Al-Ahli took just 11 minutes to break the deadlock with Federico Cartabia scoring from a header after latching on to a cross from Jaloliddin Masharipov. The visitors could have cut short the deficit when Abdulrahman Ali rifled a shot at goal, but Al-Ahli keeper Majed Naser was equal to the task.

Just seven minutes into the second half, Cartabia doubled the lead for his team after he was set up by Carlos Eduardo.

Al-Wasl looked rattled after going down 2-0 and while they were still recovering from the shock, Igor Jesus scored the third goal of the match with a towering header to seal the tie in his team’s favour. Striker Fabio Lima converted from the spot to pull one back but that was too little to change his team’s fortunes.

In the other match, Al-Nasr beat Al-Ittihad 7-6 on penalties after the two teams were locked in an aggregate score of 3-3 after two legs.

Ryan Mendes scored for Al-Nasr in the 39th minute to inspire a comeback. The forward made the most of a rebound of Dia Saba’s free-kick to head home the opening goal. Saba once again came close to double the lead for his team but was denied by the woodwork three minutes before the break. However, just at the stroke of halftime, his piledriver nestled into the net which put Al-Nasr ahead on aggregate with 45 minutes to play.

In the second half, The Tigers played with more attacking intent and purpose. They were creating goal-scoring opportunities through Ahmed Amer and Abdul Salam Mohamed but were unable to convert on both occasions.

VAR came to their rescue as the hosts were awarded a penalty for a foul by Mohamed Ayed inside the box. Peniel Mlapa made no mistake from the spot and the game went to a penalty shootout.

Al Nasr held their nerves till the very end and won the tie-breakers 7-6 to register their spot in the finals against Shabab Al-Ahli on March 6.

Modise: Orlando Pirates played as if they were a man down against Bloemfontein Celtic

Wed Mar 3 , 2021
Phunye Sele Sele and former Buccaneer forward Ndumiso Mabena was sent off just before half-time for a studs-up challenge on Linda Mntambo Former Orlando Pirates star Teko Modise felt the Soweto side could have been more ruthless against a 10-man Bloemfontein Celtic side in their 1-0 win at Orlando Stadium […] 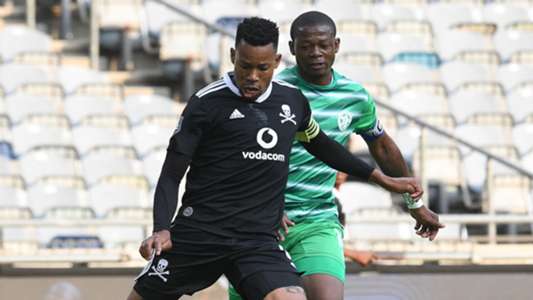