Can Spurs extend the Reds’ winless streak in this top-of-the-table clash in North London on Wednesday?

Premier League fans will be treated to a title showdown on Thursday evening when Tottenham Hotspur welcome Liverpool to North London.

All eyes will be on the Reds to see whether they can end their miserable winless run in the top flight, while Jurgen Klopp will be desperate for his side to bounce back after they were beaten by Manchester United in the FA Cup Fourth Round.

Spurs, however, may be quietly confident of springing a surprise, as they extended their undefeated streak to eight matches with victory over Wycombe Wanderers in their own FA Cup tie on Monday.

Liverpool continue to be ravaged by injury, with five players set to miss the trip to Spurs.

In defence, Virgil van Dijk and Joe Gomez continue to be major losses, and their absences affect Liverpool both in the backline, and in midfield, where Fabinho and Jordan Henderson have been forced to step out of position and deputise in defence.

Henderson may not even be able to do that against Tottenham, as he is currently out with a muscle problem, with no date given for his potential return and only a 50-percent chance of featuring.

Naby Keita, a potential solution to replace either Fabinho or Henderson in midfield, remains absent, while Diogo Jota shouldn’t be expected back until mid-February at the earliest.

With a lack of depth due to injuries, Klopp will again be relying on his out-of-sorts frontmen Mohamed Salah and Sadio Mane.

Dele Alli and Matt Doherty are unlikely to return for Tottenham, with both players given a late-January date for returning to the fold, while Giovani Lo Celso faces longer on the sidelines.

Even though they’re in better current form than their rivals, Spurs have lost their last five league games against the Reds, and certainly, Klopp has had the advantage over both Jose Mourinho and his predecessor Mauricio Pochettino.

Victory for Liverpool would extend Spurs’ losing run to an unprecedented six matches, while the Reds have never won three in a row away from home against the Lilywhites.

Expect Spurs to start strongly—only Manchester City have scored the opening goal in a game more often than the Londoners this season—and they can take confidence from Liverpool’s poor recent away form; they’ve lost two and drawn five of their last seven games away from home.

How Roberto Firmino would love to end his underwhelming spell with a goal against Spurs; the Brazil attacker has scored four in his last five league outings against the Londoners, and appears to relish the prospect of playing against Mourinho’s side.

While Liverpool have a strong recent record against Spurs, Klopp’s side are at a particularly low ebb having dropped 12 points across their last 15 matches.

Tottenham have their vulnerabilities—it wasn’t that long ago they were beaten by Liverpool and Leicester City in back-to-back league games—but their attacking might should have too much for a Reds defence that was exposed against United.

If Salah and Mane can find their feet, then they have the quality to trouble a Spurs defence that can still look jittery, but we haven’t seen the two African superstars at their best now for well over a month.

Alba: I know that I am one of the most hated players in football

Tue Jan 26 , 2021
The Barcelona star believes he doesn’t have the best reputation on the field due to his combative style of play Jordi Alba says that he feels like he is one of the most hated players in football, although he says his off-the-field attitude is much different than his on-field persona. […] 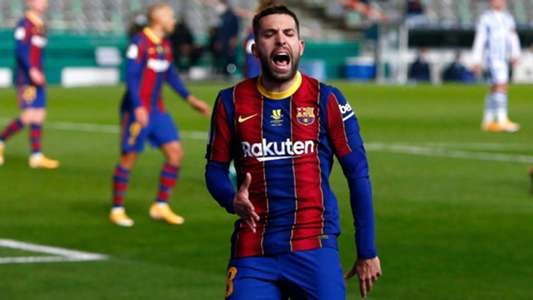