Tottenham have no personality without Harry Kane, according to Rio Ferdinand, who says Jose Mourinho is lacking characters in his squad.

Spurs suffered their third Premier League defeat in a row at home to Chelsea on Thursday night, with Jorginho scoring from the penalty spot to seal a deserved 1-0 win for the Blues.

The north London outfit offered little in terms of an attacking threat over the course of 90 minutes as they seemed content to sit back and absorb pressure despite only facing a narrow deficit.

Tottenham’s best chance didn’t come until late on, with Carlos Vinicius putting a free header wide of the post, leaving Mourinho with his head in his hands on the touchline.

Kane missed the contest through injury, having also sat out Spurs’ 1-0 loss at Brighton last weekend, and Ferdinand is concerned that they do not have enough players willing to step up in his absence.

“It was an aimless performance. Nothing to it. No personality,” the former England and Manchester United defender told BT Sport post-match.

“If Kane doesn’t play, the personality of this team is drained straight out of the team. No confidence, no character, no leader. Nobody driving the team.

“Whether that’s the players or the manager who needs to drive this time, I think it’s a combination of both.

“We saw them against Brighton last week and Brighton looked like the team going for Champions League football. It’s worrying.

“They are not far off the Champions League in terms of points, but the way they are performing of late is a worry.”

Ferdinand was joined in the studio by Jermaine Jenas, who played for Tottenham between 2005 and 2013, and he was also scathing in his assessment of Mourinho’s team at half-time.

“There’s no plan. That’s the problem,” he said. “I’m looking at players who are scared, they don’t want to get on the ball. That’s the biggest crime you can make as a footballer.

“Another big problem of theirs is their body language, it’s shocking.

“Serge Aurier, standing around, doing nothing. Vinicius, do you want to help out and run into channels or come in? No, a lot of standing and watching. The players are not interested.”

Fri Feb 5 , 2021
The 26-year-old Guinea-Bissau international received treatment on the pitch for more than 10 minutes after landing on his head Porto have issued a positive update after right-back Nanu was knocked unconscious in a horrific collision in his side’s 0-0 draw at Belenenses on Thursday. The 26-year-old collided in the air […] 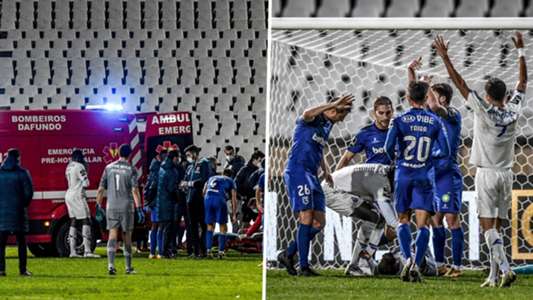