Tottenham “aren’t bothered how they play” under Jose Mourinho as long as they win, according to Jonathan Woodgate.

Spurs have gone through the last 13 years without winning any silverware, but took a huge step towards bringing that streak to an end by reaching the Carabao Cup final on Tuesday night.

Goals from Moussa Sissoko and Son Heung-min gave Mourinho’s side a 2-0 home win over Brentford which ensured that they will take part in the showpiece event against either Manchester United or Manchester City in April.

Tottenham are in a strong position in the Premier League too, as they sit four points behind leaders Liverpool having played a game less, while the FA Cup and Europa League are also still up for grabs in the second half of the season.

Despite the team’s recent progress, Mourinho has faced plenty of criticism, with it suggested that the Portuguese manager is failing to utilise the talents of an all-star forward line to full effect by setting up to stifle opponents instead of embracing a more attack-minded philosophy.

However, Woodgate, who was the matchwinner when Spurs last lifted the League Cup in 2008, thinks Mourinho’s players will be fully behind him as they continue to chase down tangible rewards on multiple fronts in the coming months.

“They’ve had chances over the years and they’ve got another great chance now.

“Their style is different, but they haven’t won anything under different managers, so they might win something under this manager and Jose Mourinho has won league titles and Champions Leagues all over the world.

“Okay the style of football is not great, but they’re in a cup final and they’re only four points off the top of the table. He’s getting results, and that’s the most important thing in football.

“Players want to win games, they’re not bothered how they play, in my view.

“If I was a player now, all I’d want to do is win, and I don’t care how we win, no matter what style we play, as long as we win.

“Mourinho has done it all over the world, he did it at Inter Milan and they won the European Cup, he’s doing it at Spurs now and he will bring them success.

“That’s why they’ve brought him to Tottenham, he wins trophies.”

Manchester United and Liverpool target Daka: I can be like Aubameyang, Salah and Mane

Wed Jan 6 , 2021
The 22-year-old striker has attracted plenty of attention since joining Red Bull Salzburg in 2017 and is aiming to emulate Premier League stars Red Bull Salzburg striker Patson Daka has backed himself for big things in the future, saying he could go on to emulate fellow African stars Pierre-Emerick Aubameyang, Mohamed Salah […] 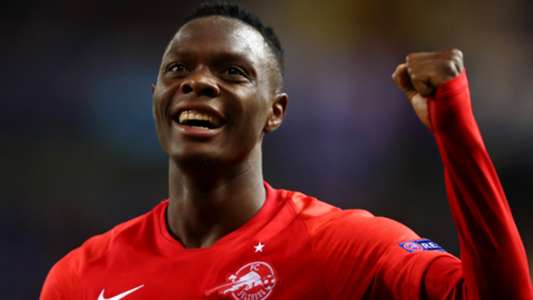