Luke Shaw has bemoaned Manchester United’s “sloppy” display against Arsenal, insisting “to be in the title race we have to be winning these games”.

United had been billed as genuine title contenders before their surprise home defeat to Sheffield United in midweek, but that result left them sitting one point behind leaders Manchester City having played a game more.

City extended their lead at the top of the table to four points by beating the Blades at Etihad Stadium on Saturday afternoon, putting extra pressure on the Red Devils ahead of their meeting with Arsenal.

Unfortunately for Ole Gunnar Solskjaer, his team were unable to get back to winning ways at Emirates Stadium despite creating a number of clear cut chances against the Gunners.

Marcus Rashford, Bruno Fernandes and Edinson Cavani were all guilty of wasteful finishing during the 0-0 draw.

Shaw has admitted that United were far too laborious in their build-up play, and has warned his team-mates that the Premier League trophy is an unrealistic goal if they cannot rediscover their ruthless streak in the final third of the pitch.

“[It’s] two points dropped I feel. I felt we were in control, Arsenal had a spell but we were comfortable and had countless massive chances we haven’t taken,” the full-back told Sky Sports post-match. “It would have been a brilliant result winning here, we have to be winning these games.

“The chances we had, I don’t think it’s acceptable to come away with a point – I haven’t been in the changing room yet but I’m sure the lads will be disappointed.

“At times we were too slow. Second half we were sloppy and gave the ball away. We didn’t look like we wanted to play. We created the chances and failed to score again and it cost us two points.

“We dropped points in midweek and again here. If we want to be in the title race we have to be winning these games. I don’t know what more to say.”

Shaw and co will now have to dust themselves down ahead of a home fixture against Southampton on Tuesday, which comes four days before they welcome Everton to Old Trafford.

Sun Jan 31 , 2021
Arteta and Solskjaer had their say after a rare goalless draw between Arsenal and Manchester United Source of the article 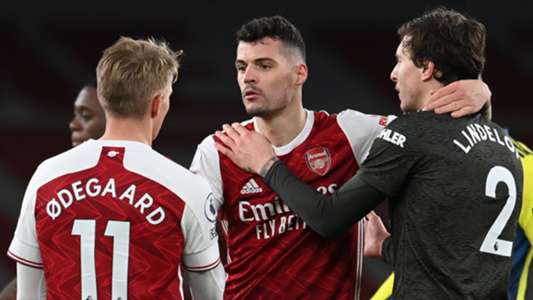