Mikel Arteta has acknowledged that he is unlikely to welcome back Kieran Tierney and Thomas Partey from injury ahead of Arsenal’s Europa League clash with Benfica.

The duo sat out the Gunners’ 4-2 victory over Leeds United at the Emirates Stadium on Sunday, as Pierre-Emerick Aubameyang fired the hosts to a first win in four games.

And it appears left-back Tierney and midfielder Partey will have to sit out another game, with Arsenal due to take on Benfica in Rome on Thursday.

Speaking in his post-match press conference, Arteta said: “It seems unlikely at the moment, but I don’t know. Probably if there is one player who has got a bigger chance, it’s Kieran.

“Probably in the next few days he can start to do some parts with the team. But I don’t know how he is going to evolve when he gets a little bit closer to training with the group.”

What games have Tierney and Partey missed?

Scotland international Tierney has not played since the Gunners’ 3-0 win over Newcastle last month, when an Aubameyang double helped fire the hosts to a comfortable victory.

Since then, he has missed six games in all, including his side’s FA Cup exit to Southampton, a reverse victory in the Premier League, a draw with Manchester United and losses against Wolves and Aston Villa.

Conversely, Partey featured in all those matches for the club, but was forced off with a hamstring injury heading into the final quarter-hour against Dean Smith’s side at Villa Park, meaning that this weekend’s game was his first absence since a cup win over Newcastle in early January.

While Partey’s setbacks have already become a recurring nightmare for Arteta, both his and Tierney’s absences ahead of a return to Europa League action are an issue the Spaniard could really do without.

The Gunners travel to Rome to face Portuguese side Benfica – in a fixture relocated for Covid-19 reasons – and the Scotsman’s absence in particular is likely to be felt.

With just two wins from six since the former Celtic man was forced to the sidelines, his importance at the back for Arsenal cannot be underestimated in a crucial encounter, particularly with the club’s European qualification ambitions somewhat stymied in a close-fought mid-table scramble in the Premier League.

While Partey’s absence is also likely to be felt, his prolonged layoffs this season means that Arteta has already found ways – if not wholly successful ones – to compensate for when he is missing in action, though a surprise early return would be a significant boost.

Sun Feb 14 , 2021
The midfielder has started just five league games in his first season at Camp Nou after joining from Juventus last summer Miralem Pjanic insists he has not been told by manager Ronald Koeman why he isn’t playing more at Barcelona. The midfielder was expected to play a big role at Camp Nou this […] 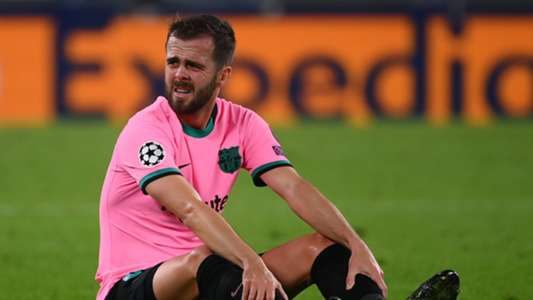