Ahead of Chennaiyin’s crucial Indian Super League (ISL) fixture against Jamshedpur on Wednesday, head coach Csaba Laszlo had said that the game wouldn’t be decided by just one goal.

“I think one goal won’t decide this game. Jamshedpur is always dangerous. It will be very important that we have the concentration and score from the chances we get,” Laszlo had said on the eve of the game.

But not only did Chennaiyin once again fail in front of the goal, Enes Sipovic’s own goal in the 90th minute gifted Jamshedpur three extremely valuable points in the race for the top four.

It was a must-win tie for both teams as neither team could afford to lose more ground in the race for the top four. They did not want to take any risks in the beginning and that resulted in a cagey affair for most of the first half.

66.4 % – @JamshedpurFC have a passing accuracy of 66.4%, the least in the current campaign of the #ISL . 3424 of their 5154 passes have been successful. Indigent. #CFCJFC #HeroISL #LetsFootball pic.twitter.com/VRPliCXdxe

Chennaiyin were a threat whenever they pushed forward to score a goal. Their best effort came at the half-hour mark when Lallianzuala Chhangte found Rahim Ali’s run into the box. The Indian forward took his shot well but Ricky Lallawmawma pulled off a goalline block to keep the game goalless.

Jamshedpur were without their star striker Nerijus Valskis who missed the game due to an injury. And his absence was clearly felt as the Men of Steel looked ineffective in the final third.

Without Valskis, David Grande was given the responsibility to come up with goals and he nearly did after the break. He got on the end of Peter Hartley’s flick-on from an Aitor Monroy free-kick delivered into the box but sent his effort inches over the crossbar.

At the other end, new signing Manuel Lanzarote, who was starting just his second game since joining the club in the January transfer window, was getting marked out of the game by an alert Jamshedpur defence that seemed like they had clear instructions on how to tackle the former FC Goa playmaker.

Even without Lanzarote being able to make much of an impact, Chennaiyin still had chances here and there in the second half but they simply didn’t have the composure to convert them into goals. Chennaiyin have only scored 11 goals from 17 games this season – three goals fewer than the next worst scorers. They have also fired blanks for three games in a row – that is just criminal for a playoff aspirant.

For the Men of Steel, Hartley and Stephen Eze were vigilant at the back and Eze, in particular, contributed immensely with his blocks and interceptions to deny and frustrate the Machans on multiple occasions.

It looked like the game was slipping away from Jamshedpur as Laldinliana, Alex Lima and Eze had to be forced off the field due to injuries at various points in the second half. But quite remarkably, they found a late winner without having registered a single shot on target in the entire game.

Grande attacked the Chennaiyin box from the right side, cut in on his left foot and forced a heavy deflection off Sipovic’s legs to find the net and force a match-winning own goal.

Jamshedpur were defensively solid and had the mentality to keep the Chennaiyin attack in check but their overall performance still left a lot to be desired. They still lack goalscorers in the final third and also now has the worst passing accuracy this season among ISL teams. At the end of the day, regardless of how they’ve achieved the win, it’s still three points that keep them in the race for the playoffs.

Thu Feb 11 , 2021
Rahul KP could soon be seen in the India national team, given his stellar displays for Kerala Blasters… List the best wingers in India right now and Rahul KP will feature in it.  The Malayali winger, who hails from Thrissur, is just 20 years old but is putting up a claim to […] 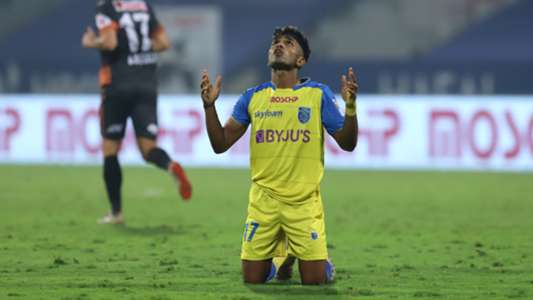