Mamelodi Sundowns head coach Manqoba Mngqithi heaped praise on his second-half substitutes for their impact in the win over Black Leopards on Wednesday evening.

A brace from Peter Shalulile inspired Masandawana to a 2-1 victory over Lidoda Duvha in a PSL match which was played at Thohoyandou Stadium.

While Andile Jali, Sphesihle Mkhulise and Lesedi Kapinga all came on after Mothobi Mvala was sent off and Sundowns pushed for the winning goal which they got in stoppage time.

“It was one of those matches where when we had all the numbers we did not put the intensity that we put when we were a man short, it’s very strange,” Mngqithi told SuperSport TV.

“Because I believe first-half we gave a little bit more, they gained confidence and momentum and started to think they can play the moment we started putting them under pressure and working very hard.

“I must say the substitutes that we put in also added a lot of value to the guys that had already exhausted their legs, I believe ‘AJ’ [Andile Jali], [Sphelele] Mkhulise did a very good account of themselves,” he continued.

“Gaston [Sirino], [Lesedi] Kapinga were also instrumental but Peter [Shalulile] was a tiger up top, fighting for every ball, you can never take that away.

“The captain [Hlompho Kekana] playing as a 6 and also coming to play as a central defender at a later stage, fought very well with Mosa [Lebusa] and [Lebohang] Maboe,” he added.

“I must commend him, it’s very difficult to move from midfield into defence during the game and still be able to adapt quickly, so it was encouraging.”

Why does it matter & what’s the bigger picture? League leaders Sundowns are now three points clear of joint second-placed SuperSport United and Swallows FC, who both have a game in hand.   The victory saw Masandawana snap their three-match winless run having recorded three successive draws and they remain undefeated in the league this season.  Mngqithi will be pleased to have seen Shalulile end his five-match goal drought by scoring twice against Leopards.  A clash against Chippa United is next for Sundowns on Sunday and a win for the Tshwane giants could see them extend their lead to five points if Saturday’s clash between SuperSport and Swallows ends in a draw. Sundowns boast an unbeaten record against Chippa in the league having registered eight wins and six draws from 14 matches. Further reading

Wed Jan 27 , 2021
The Ivorians and the Ghanaian were in fantastic form as José Moncayo’s side bounced back to winning ways on Wednesday Ida Guehai provided the assist as Rebecca Elloh and Grace Asanteewa scored in Logrono’s 2-1 victory over Rayo Vallecano in Wednesday’s Spanish Primera Iberdrola encounter. Before the encounter, Logrono were […] 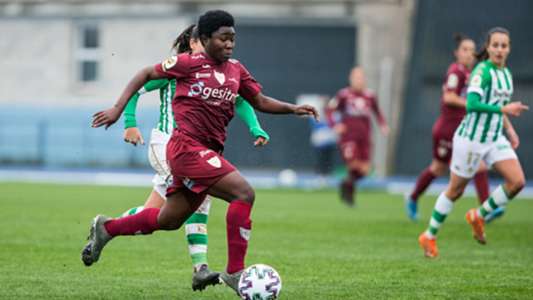