Eric Bailly has expressed his delight after committing himself to two more seasons with Premier League outfit Manchester United.

The 27-year-old centre-back joined the Red Devils in the summer of 2016 from La Liga side Villarreal.

Since his arrival, he has featured in more than 100 games for the Old Trafford giants in all competition.

His new contract will see him remain with Ole Gunnar Solskjaer’s team until 2024, with the option of a further year.

And he has taken to social media to revel in the extension by stating that “the dream continues”.

Very happy to renew with the club. Thank you to all of @ManUtd for placing your trust in me. 😄

“Very happy to renew with the club. Thank you to all of Manchester United for placing your trust in me. The dream continues,” Bailly tweeted.

The Ivorian had earlier disclosed why he decided to remain with the 20-time English elite division kings.

“This decision is something I didn’t have to think about, I love this club and I love playing for Manchester United. I’m happy and so are my family, everything is good.

“Now the moment with my injury has passed and I’m fit and feel good, and that’s it. A new contract is like a new challenge and I’m ready for this. For me, it’s the dream to be here. Now it’s my fifth season and I hope to be here a long time.

“We are in a good position. We have the Europa League and we are second in the league and that is very good.

“We hope we can win this trophy [Europa League] – it is very important for us and for the fans and for the season.

“We want to finish well in the Premier League as well, I’m sure we will.”

This season, Bailly has played in 15 games for Solskjaer’s men in all tournaments, including eight appearances in the English elite division.

After recovering from coronavirus while on international assignment, he could be considered for selection when United take on Serie A outfit AS Roma in Thursday’s Europa League encounter.

Mon Apr 26 , 2021
Roy Hodgson makes one change from the 4-1 defeat to Chelsea as Scott Dann replaces injured Gary Cahill in the heart of the defence. Brendan Rodgers names an unchanged line-up from the side that eased past West Brom 3-0. Luke Thomas continues to start on the left as in-form Iheanacho […] 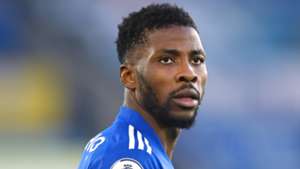