When Victor Ikpeba scored 14 Ligue 1 goals for Monaco in 1997/98, the ex-Nigeria international probably never imagined his haul would stand for over two decades.

Admittedly, this is probably due to the dearth of Nigerians participating in the French top flight over the years, as well as the pandemic, which meant Victor Osimhen couldn’t supplant the Prince of Monaco last term.

Having said that, Terem Moffi’s 14-goal haul after 28 games means Ikpeba’s tally is likely to be beaten after 23 years. The Lorient frontman’s return has come in 22 starts, which adds further gloss on an amazing goalscoring season that’s gone under the radar owing to the form of other Nigeria forwards in 2020/21.

Moffi had never played in any of Europe’s top five leagues until this year either, so scoring 14 times in 22 starts having had a slightly late start to the campaign is commendable.

Who is the Nigerian star lighting up Ligue 1?

The 21-year-old missed the newly-promoted side’s first six games of the campaign but made a goalscoring debut in the side’s 3-1 win at Reims only to go on a nine-game drought in front of goal.

The fact he had a similar run without scoring until his recent run — eight games in all competitions, with seven in Ligue 1 — fuels suggestions he’s a somewhat streaky forward.

Still, Christophe Pelissier’s team will likely owe survival to their young forward, whose tendency to oscillate between feast and famine is understandable owing to his age and the team’s challenges on their return to the top division.

Moffi has been involved in 36 percent of Les Merlus’ goals, with the most notable strike probably coming in the 3-2 success over Paris-Saint Germain at the death in late January. A brace against Monaco wasn’t quite enough to secure all three points as Wissam Ben Yedder hit a 93rd-minute leveller that broke Lorient hearts in the 2-2 draw.

His manager feels there’s even more to come from the forward, whose hat-trick against a Bordeaux side in dire straits helped the relegation strugglers stay four points clear of Nantes in 18th.

“Moffi arrived late (at the club), he had a difficult start, but his form is not surprising to us due to what he does in training, and what he will continue to do,” Pelissier remarked after Sunday’s victory.  “He is not yet at 100% of his potential and I don’t dwell on the success of one player, but of a super-efficient attacking duo (Moffi and Yoane Wissa) and we know the qualities of these strikers.”

Moffi’s treble made him the fourth Lorient star to register three goals in a Ligue 1 game, a timely result as the 17th-placed side maintained their four-point advantage over Nantes and trail troubled Bordeaux with one point.

Their top marksman’s 14 strikes have come from Expected Goals of 12.1, which is healthy for sustainability going forward.

In normal circumstances, the forward’s form ought to mean a Nigeria call-up, but the nation’s plethora of in-form strikers in 2020/21 has increased competition for a Super Eagles place.

While he missed out on last month’s international fixtures — which wasn’t helped by the fact the hiatus came during a scarcity of goals — a greater argument can be made for the Calabar-born striker if Gernot Rohr wanted to name a squad at present.

He has the advantage of scoring in one of Europe’s top five leagues, as opposed to Paul Onuachu who stars for Genk in Belgium and Umar Sadiq whose goals have come in Spain’s second division.

Moffi’s xG per 90 ranks in the top 10 in Ligue 1 and he rises to fifth for players who have started at least 10 games.

When penalties are excluded, the Nigerian is third among players with 10 starts in the division which strengthens his claim for a spot in Rohr’s team.

In the interim, though, the marksman’s focus is firmly on survival with four games to play. His manager reckons 40 points is the magic number and the Brittany club need five points from a possible 12 to hit Pelissier’s challenge.

If Moffi’s current streak holds, the ongoing calls for a Super Eagles role will grow even louder and it’ll be hard to ignore one of Nigeria’s in-form striker’s in Europe.

Wed Apr 28 , 2021
Fans set to return to stadium in UAE… The UAE Football Association (UAEFA), in coordination with the National Crisis and Emergency Management Authority (NCEMA), has decided to allow fans for the Presidents Cup final that will be played between Shabab Al-Ahli and Al Nasr at the Hazza Bin Zayed Stadium on […] 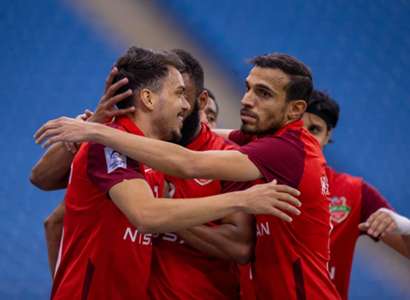