If you believe in that sort of thing, you might be tempted to think of Sunday Mba as some sort of enigma, without beginning or end, like the Biblical Melchizedek.

Not with regard to literal origin, of course – we know quite well where he came from – but as touching the abruptness of his exit from the limelight. Even from all contact.

In a way, it follows a general theme with all those whom former Super Eagles boss, the late Stephen Keshi, brought through to the national team. As is the case with Mba, the likes of Godfrey Oboabona, Reuben Gabriel, Ejike Uzoenyi and Juwon Oshaniwa seem to have slipped completely off the radar.

Perhaps because none of those quite had the same impact, quite captured the imagination in the same way. Certainly not for that three-week period at the 2013 Africa Cup of Nations.

Also because Mba was not simply a player who seized a chance to shine. He, instead, arose as the answer to a challenging dilemma, one which threatened to derail Keshi’s Super Eagles project.

For so long, there was uncertainty as to who ought to complete the midfield triangle. The base was largely set, with Ogenyi Onazi and John Obi Mikel in tandem acting as a screen for the defence, but who would act at the tip?

It was all the more relevant because the team needed a player to connect its attack to the back of the midfield, to keep from being broken. Nosa Igiebor, who seemed to be in favour initially, failed to carry out the brief, and so Mba was handed the responsibility from the third game of the competition, one which Nigeria needed to win to remain in the competition.

It was, however, in the next round that he showed just what had justified that faith. His run at the Ivory Coast defence for the winner is etched into the memory, but even before that, he had given the pre-tournament favourites the run-around, and that in a game which the Super Eagles were not expected to win.

It was a breakthrough moment, yes, but beyond that it felt like a coronation.

Nigeria had not had a dribbling No. 10 since Jay-Jay Okocha retired, and while Mba was certainly not in that league, neither was the rest of this team in the league of Okocha’s peers.

It was not perfect, but it was the closest approximation of it for a while.

This then is the great disappointment of Mba. He would decide the final as well, executing a marvelous piece of skill to beat Burkina Faso in Johannesburg, but what was meant to be a launchpad instead became a flash in the pan, a fleeting moment in which he transcended himself.

It was like a man taking out a loan on all of his future earnings, then buying himself a seat on a spaceship with it.

There were a number of ill-judged moves: for instance, moving to France and thereby rendering himself ineligible for the 2014 Championship of African Nations (Chan) broke the bond of trust with Keshi; but that should not have been enough to derail the obvious talent that meep-meeped its way through the grasses of the Rainbow Nation.

Sunday Mba is on the move!

He hasn’t had a club since he left Yeni Malatyaspor in September 2017…three and a half years, and counting.

Instead of as some great unfulfilled talent, perhaps the best way to think of Mba is as a mortal who, for a brief period, was taken over by the gods for a magnificent purpose.

There is little by way of legacy, but in terms of moments, and considering what has come after, has there been a more impactful individual in Nigerian football for a decade?

Wed Feb 10 , 2021
The Kenyan giants will face the Zambian rivals on Sunday in the first leg of the pre-group stage encounter Retired Kenyan striker Ronald Okoth has explained how moving into the Caf Confederation Cup from the Champions League should act as motivation for Gor Mahia. After an underwhelming outing against CR Belouizdad […] 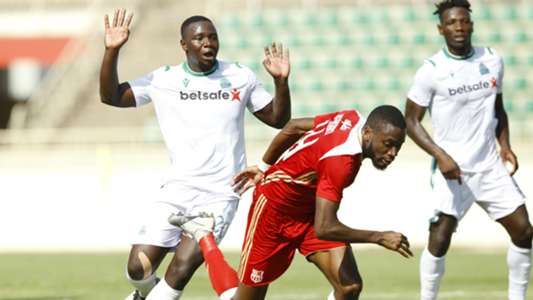