The forward put pen to paper on a three-year deal at the Stadion Juliska outfit after successful medical examinations.

Faleye last played for Austrian second division side FC Wacker Innsbruck, where he found game time difficult to come by, featuring only in 10 league games.

In an effort to enjoy more playing opportunities, the forward has teamed up with Roman Skuhravy’s men until the summer of 2024.

Faleye has expressed his delight to join the Czech second division side and hopes to help the club achieve success.

“I am excited to have become a part of Dukla. I will try to do my best on the field and help the team to get as many points as possible,” Faleye told the club website.

“I am very happy that we managed to catch the arrival of the first selected player, we are discussing the others,” Stanek said.

“We stood a lot on Sunday, it has very interesting advantages and preconditions. It increases our danger in attack, he is very strong one on one.

“We sometimes lacked more courage in these moments in the autumn and Sunday should clearly help us. Most opponents defend against us, so we need players who can bring us an advantage.”

Faleye featured for Shooting Stars and Akwa United in the Nigeria Professional Football League (NPFL) before moving abroad to join SCR Altach and then Wacker Innsbruck.

The forward featured for Nigeria’s U23 side prominently and also represented the Super Eagles’ home-based team.

Faleye will link up with his compatriot Michael Ugwu and Ivory Coast midfielder Mohamed Doumbia at Stadion Juliska.

The attacker could make his debut for FK Dukla Prague when they take on Taborsko in their next league game on January 10.

Thu Jan 7 , 2021
Karisa, Kyeyune help Uganda complete pre-Chan tournament with Niger victory The Cranes had registered a win against Zambia after they had opened with a 1-1 draw against the Indomitable Lions Milton Karisa and Saidi Kyeyune were on target as Uganda picked up a 3-0 win over Niger at the Annex […] 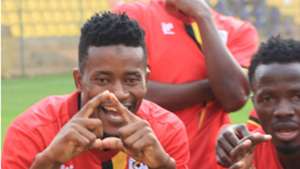