Raheem Sterling has become just the third player to score 100 or more goals under the guidance of Pep Guardiola.

The Manchester City forward chalked up triple figures with a close-range header as his side recorded a 4-1 win over Liverpool at Anfield that puts them in full command of the Premier League title race.

Sterling’s strike may not have been spectacular, but it was of great significance both in terms of the direction of the season and as a personal milestone as it was his 100th under the former Barcelona and Bayern Munich head coach.

Indeed, the England international’s special achievement is made clearer by the fact that only two players have achieved such a feat before. One of those is club-mate Sergio Aguero, who has scored 120 times under the former Spain midfielder, while the other is six-time Ballon d’Or winner Lionel Messi, who stands apart with 212 goals under Guardiola’s guiding hand.

The 26-year-old Sterling has been at Manchester City since 2015, when he made a high-profile move from Liverpool.

Raheem Sterling has become the third player to score 100 or more goals under Pep Guardiola! 💯 pic.twitter.com/w3A89vcdXF

Guardiola arrived a year later and oversaw a transformation in Sterling’s game. Previously considered to be wasteful and panicky with his final action, Sterling has become an important offensive arm for the Champions League hopefuls.

Indeed, he has netted at least 15 Premier League goals in each of the last three seasons, having never gone past 10 before that. Last term, he notched 31 in all competitions, which was the third year in succession he had notched a career-best figure.

Sterling is unlikely to challenge that tally this term, however. He endured a slow start to the campaign but has been picking up the pace in recent weeks. Indeed, he has now scored in each of City’s last three Premier League matches and four of their last five. In total, he has nine in the league plus 11 in all competitions.

City, meanwhile, have put themselves in a strong position to reclaim the title they lost to the Reds last season. They have opened up a five-point lead over Manchester United and have a game in hand over their neighbours.

Defending champions Liverpool, meanwhile, are 10 points back having played a game more.

Sun Feb 7 , 2021
More historic landmarks were sent tumbling as Pep Guardiola’s side hammered the Premier League champions 4-1 on Sunday evening Manchester City wrote yet another page in the history books with their stunning 4-1 victory against champions Liverpool on Sunday. A double from Ilkay Gundogan, plus further goals from Raheem Sterling […] 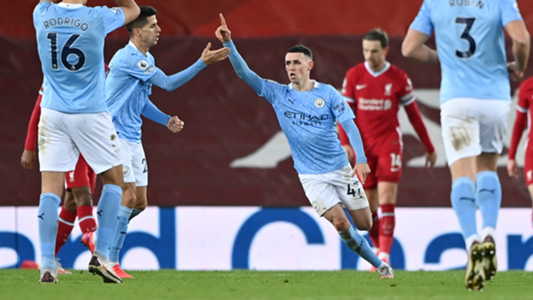