Hyberabad coach Manuel Marquez believes that players must thrive under pressure of making it into the 2020-21 Indian Super League (ISL) play-offs.

With five games remaining, The Nizams are locked on points (22) with FC Goa and NorthEast United but the gaffer has not ruled out Bengaluru and Jamshedpur just yet as there is just a four points gap between the third and seventh placed teams on the table.

“This is the same question from two weeks ago and will be the same question next week. Odisha, East Bengal and Chennaiyin practically have less options (of qualifying for the play-offs), not mathematically. Now there are less teams who can arrive in the top four but at this moment, I think ATK (ATK Mohun Bagan, 27 points) and Mumbai (Mumbai City, 33 points) will be in the top four for sure.

“NorthEast and Hyderabad have the same points but I think that Bengaluru and Jamshedpur can also arrive in the top four at this moment but every week, it (the permutations) will be different. We don’t have extra pressure. If you don’t play well because you are under pressure, maybe you shouldn’t play football. This kind of pressure is what we want,” he said.

The Spaniard called for consistency from his players as they have only managed one win in their last five outings, which included four draws. They are next up against NorthEast United on Sunday in what promises to be an intriguing tie.

“When you win a game, it’s always important. As I said, people say that a draw is nothing but if you win after a draw, you have more points. For this reason, it is very important. We put distance because Chennaiyin was a team very close to us,” Marquez mentioned.

Hyderabad have scored more goals (13) than the rest of the 10 teams in the month of January but Marquez is more focussed on the task at hand. He reiterated that it’s vital for his players to focus on one game at a time and their confidence stems from the fact that they have played a good brand of football.

“In football you can tell one thing and you are right and I can say another thing and I am right. I think the questions change every week depending on the last game. I think you have to look at not only the last game but the entire season of the team.

“We are playing good football and we will fight for the top four until the end of the competition. The statistics are very good for the people. We are now seven games unbeaten but (this) can change. Now if we win against NorthEast, people will say practically we are in the top four [and] if we lose, practically out. False. Of course, we have confidence now because we are playing all season in a good way, but we have to continue game by game.”

However, Marquez couldn’t ignore the fact that NorthEast United have picked three wins and a draw under the tutelage of interim coach Khalid Jamil.

“Of course, the work of Khalid is very good because it’s not easy to win against ATK (Mohun Bagan), Jamshedpur (and Mumbai City), and the other day when you are twice down against Goa to equalise the game. I think the most important thing is that Khalid gives the players’ confidence. They play with a good organisation in defence and have very good players in attack. Of course, we will have options to win the game if we play in our good style,” he concluded.

Sat Feb 6 , 2021
East Bengal won’t give up in their fight to make it into the play-offs this season as mathematically they are still in the race… East Bengal will hope to end their five-match winless run when they take on Jamshedpur FC in their 16th match of the ongoing Indian Super League […] 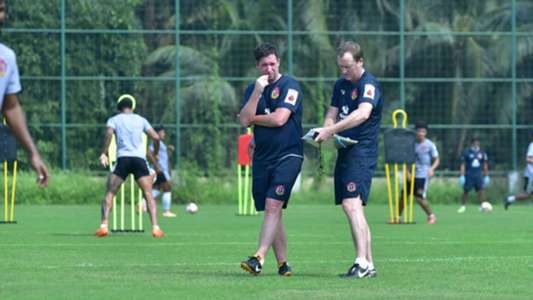