Kevin De Bruyne feels Manchester City must attempt to take the positives in defeat after their remarkable record-breaking run came to an end in a derby day defeat to Manchester United.

Bruno Fernandes’ early penalty and Luke Shaw’s composed finish handed the Red Devils local bragging rights at the Etihad Stadium, to bring the curtain down on their 21-game winning streak.

Pep Guardiola’s side remain firmly in pole position in the Premier League despite their loss however, and De Bruyne, while disappointed with the result, says that the Blues will try to view their reverse as fuel to drive them further.

“Obviously I don’t think we started very well,” the Belgium international told Sky Sports after the game. “We knew it would be hard.

“We played into their hands with the first goal and we needed about 15 minutes to settle a bit. Then we played pretty good but we didn’t score and that made a difference.

“It is not the best if you go behind after one minute but you still have 90 minutes after that. The second was a little worse [to concede] but I think the mentality of the players was the same as always.

“It is not nice to lose the derby but sometimes it happens. We have to move on – Wednesday is a new game.

“Sometimes it is necessary to lose games and have bad spells. Even in the winning run we had some bad spells but overcame then, we didn’t today. Sometimes it can be a positive.”

Despite often emerging as Guardiola’s go-to creative mastreo in moments of need, De Bruyne was unable to steer the hosts to find a response at the Etihad Stadium today.

It marked another blank showing against City’s bitterest neighbours, whom he has notched only one goal against in eight Premier League games.

For a player known for his prolific assist rate too, De Bruyne has never helped directly set up a goal against the Red Devils, an especially notable feat given that he has at least managed one against every current top-flight team except for recently-promoted Leeds United.

Sun Mar 7 , 2021
With the visitors inching closer to another defeat, the Nigerian put up a fine performance to hand her side a crucial equaliser Ini Umotong scored the only goal as Lewes earned a 1-1 draw against Charlton Athletic in Sunday’s FA Women’s Championship fixture. The 27-year-old striker has continued to excel […] 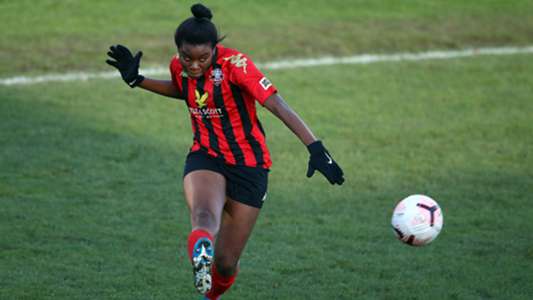