The Premier League and other top-flight divisions are still continuing in full force despite the raging nature of the Covid-19 pandemic.

The English top-flight was suspended for three months in the spring of 2020 to slow the spread of the virus, but the season resumed in June 2020 and will continue on without further disruptions for the foreseeable future.

With the pandemic still upon us, how are the footballers supposed to aid in slowing down the spread of the virus? Goal takes a look.

Yes. Due to Covid-19 still posing as an ongoing threat, especially with the information that specific UK variants of the virus are more deadly and infectious, players are being encouraged to refrain from celebrating goals with each other through hugging and close physical contact.

Since Covid-19 is spread through air droplets as an airborne disease, physical distance and elimination of close contact is essential to limiting further spread.

“We’ve sent a message to all our members saying, ‘you have done a great job, you’ve kept the game going and you deserve a lot of credit, but it’s important you keep to the protocols,” PFA chief executive Gordon Taylor told The Times.

“Always abide by what you’re being told by doctors and medical staff with regard to the protocols about keeping your distance and the hygiene that’s required.

“I understand with the celebration of a goal it’s difficult to just put the ball in the back of the net and act as though nothing has happened.

“It’s that adrenaline rush… that’s what the game is all about, but that’s part and parcel of the process, so they’ll be reminded.”

The confusion lies, however, in football being a contact sport – players are meant to tackle each other and be constantly around one another. It is physically impossible to maintain consistent distance from each other during play itself – the nature of the game calls for all players to be in close proximity with one another.

But since suspending all play in its entirety is not an option, there is the idea that eliminating or discouraging celebrations would help in further spread of the virus, even if the players on the pitch have contact with each other anyway during games.

How are players supposed to be celebrating?

According to Taylor, it is implied that the players should maintain a distance while celebrating, suggesting that they not go in for hugs or close physical embraces with one another, as that would contribute to a possible further spread of the virus.

Health guidelines suggest that remaining six feet apart from one another is encouraged to slow the spread of the virus, so celebrations that are six feet apart would potentially suffice – even though they have eliminated that distance during actual play.

What have players and coaches in the Premier League said about it?

The likes of Pep Guardiola and Mikel Arteta have voiced their concern about the socially-distant goal celebration rules, saying that in the heat of the moment, players will find it hard to control themselves.

“I read them, the new protocols,” Guardiola said. “We are going to follow them. But when one guy scores a goal, I don’t know if they can be controlled and not celebrate it.

“All of us [involved on match days] are tested negative, every two days. I don’t know what is going to happen – but one guy scores a goal, the joy to celebrate it, I don’t know if he is going to think, ‘I cannot hug my mate for two, three seconds’.

“One guy is isolated and the group has to continue. So, I don’t know. We follow what the people say at the club, the Premier League. We follow the rules. That is what it is.

“Aston Villa had 10 players isolated plus the manager. So, I don’t know.”

Arteta added: “To control the emotions when you’re going 200mph in a game full of things happening around you is very difficult to control.

“We ask in our players, in corners for example, to be man-marking people and pushing people around, and then we cannot fist-bump anybody or say hello to anybody.

“It gets a little controversial and difficult to understand.”

Fri Feb 12 , 2021
AS Vita Club 0-1 Simba SC: Mugalu’s strike enough to down Congolese giants Zamalek and MC Alger also settled for a goalless draw in Egypt in their Group D outing Chris Mugalu scored the only goal at the Pentecost Martyrs Stadium, Kinshasa on Friday night to fire Simba SC to a […] 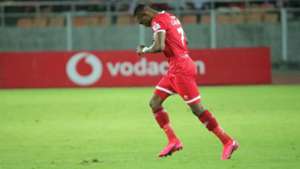