The Colchoneros are flying high in La Liga, but a post-match comment on Wednesday suggested their coach’s future is far from certain

Diego Simeone hinted at the idea he could leave Atletico Madrid at the end of the season after their awful Copa del Rey defeat to third-tier Cornella.

Simeone’s La Liga leaders exited the Copa on Wednesday, losing 1-0 to a goal from former Atletico B defender Adrian Jimenez.

Ricard Sanchez was sent off as Atleti slumped to a shock reverse swiftly described by the Spanish media as a “disaster” among the very worst of Simeone’s 502 games in charge of the club.

The long-time coach named a strong side, including record signing Joao Felix, but saw his team remarkably unable to register a single shot on target.

Copa failings are a familiar story by now, though, with the Rojiblancos losing to Cultural Leonesa last season. Meanwhile, they have not beaten a fellow LaLiga outfit in the competition since seeing off Elche in January 2017.

Simeone recognised Atleti are struggling in one-off knockout matches – also losing in last season’s Champions League to RB Leipzig – but added the surprising qualifier that it would be an issue to consider only if he was still at the helm next year.

“[Cornella] played better,” he said. “In the whole game, what they wanted was always done better than what we wanted.

“They took advantage of the set-piece situations and immediately found the goal.

“The boys tried to compete in the best way. In the first half, we had more chances, and in the second, it was rockier. It got difficult after the red card.

“This competition has not given us satisfaction in recent years but solutions will have to be found if we are here next year.”

2 – Atlético de Madrid have been eliminated from #CopadelRey by a third tier team in consecutive seasons for the first time (2-1 vs Cultural Leonesa in 2020 and 1-0 vs UE Cornellà in 2021). Surprise. pic.twitter.com/xnAYGQ9KCf

Saul Niguez, captain on the night, identified the same problem as he added: “We apologise to the fans. We never throw away competitions, but in these single-game editions we are not doing well.”

Given Atleti’s struggles, the decision to replace Joao Felix with 18-year-old debutant Mario Soriano 15 minutes from time prompted some discussion.

But the Portugal international mustered only one shot, which was blocked, prior to his withdrawal and failed to create a single chance – unlike his replacement.

Joao Felix epitomised the visitors’ display as he completed just 13 of his 21 attempted passes and lost possession 13 times, winning none of his three aerial duels.

The change still appeared a big call, yet Simeone explained his star forward was struggling with an ankle injury.

“He was hurt,” Simeone said. “We looked for a fresher guy. He had a bruised ankle and we wanted to find a guy in good condition.”

Wed Jan 6 , 2021
The 29-year-old Ghana international sealed the victory for Thierry Laurey’s men at Stade de la Meinau Abdul Majeed Waris scored his first goal of the season to help Strasbourg demolish Nimes 5-0 in Wednesday’s Ligue 1 game. The forward came off the bench to make his 11th league appearance and […] 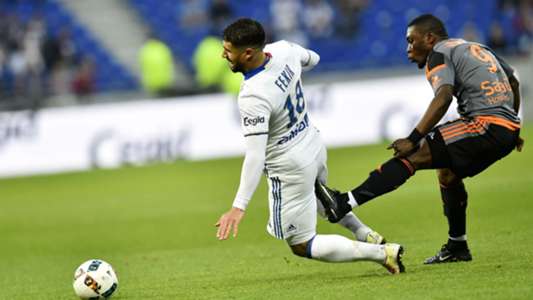