Simba SC cruised into the group stage of the Caf Champions League after a 4-0 win against FC Platinum in the return leg played at Benjamin Mkapa Stadium on Wednesday.

The Platinum Miners came into the fixture with a slim 1-0 advantage secured from the first leg meeting played at National Sports Stadium in Harare on December 23.

Simba knew they will have to win the contest by two clear goals to be assured of reaching the group stage but they had other ideas as Erasto Nyoni put them ahead from the penalty spot in the 40th minute before Shomari Kapombe added the second in the 61st minute, John Bocco grabbed in added time and Clatous Chama made it 4-0 with seconds left to the final whistle.

Simba coach Sven Vandenbroeck made two changes to the squad that played the first leg with striker Chris Mugalu coming in for Meddie Kagere who dropped to the bench while Rally Bwalya came in for Hassan Dilunga.

Despite recovering from a knee injury that kept him out of the first leg, striker Bocco was benched with keeper Aishi Manula starting same as Kenyan defender Joash Onyango and midfielder of the year Chama, who was given the captaincy armband in place of Bocco.

The Wekundu wa Msimbazi showed their intent of going for an early lead as striker Mugalu missed an open sitter in the 8th minute after his feeble shot from a Chama cross, went inches wide.

Simba continued to press their visitors and it was defender Pascal Wawa, who should have given them the lead in the 12th minute but after a well-taken corner kick from Luis Miquissone, the Ivorian rose the highest but directed his header off the target.

Simba finally took the lead in the 39th minute when Nyoni scored from the penalty spot after Miquissone was brought down inside the box and they went into the half-time break enjoying a 1-0 lead.

On resumption, Simba who were cheered on by a mammoth crowd then scored the second, this time Kapombe finishing off a cross from Chama. It was Kapombe who set up the third goal for Bocco, who had just come on as a substitute, to beat the Platinum keeper with a low shot.

With the referee checking his watch, Simba were not done yet as Chama drilled home the fourth goal after a defensive lapse inside the Platinum defence to ensure they book their place in the group stage of the competition for the third time in history.

Few hours before the game, Platinum suffered a huge blow when five of their key players were withdrawn from the squad after testing positive for Covid-19.

A source within the team confirmed to Goal the five players were already set to start in the fixture until they received their results two hours before kick-off.

“It is unfortunate some of the players who tested positive were already in coach Norman Mapeza’s plans for the match,” the source, who did not want to be named, told Goal. “We have to use the players we have anyway.”

Simba will now shift their focus to the Mapinduzi Cup which is currently going on in Zanzibar. 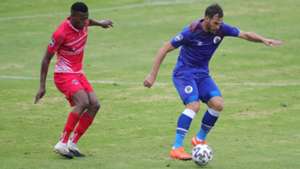