The teenage forward is highly rated at Old Trafford and has signed his first professional deal with the club having turned 17 last week.

Shola Shoretire has signed his first professional contract with Manchester United and has already been training with the first team.

The forward, who has been at United since the age of nine, put pen to paper on a professional deal last week just after turning 17.

He is highly regarded as one of the brightest young talents in the club’s under-23s side and scored a hat-trick in their 6-4 comeback win against Blackburn Rovers on Friday night. His efforts haven’t gone under the radar as Ole Gunnar Solskjaer has asked him to join first team training again.

Editors’ Picks
Why is Shoretire so highly rated?

The 17-year-old only pushed into the U23s in September but has already impressed his coaches with his quick progress. He’s played up an age group throughout his entire career, showing great confidence and ability.

The forward, who can operate as a winger, a No 10 and also as centre forward is versatile and you can see the quality in his technique and touches. His work rate this season has improved and he is already being tipped for a big future.

What does Solskjaer make of him?

Due to the restrictions with Covid bubbles at the moment, the teenager will train with the seniors for the foreseeable future and will travel to U23s games separately. He will use a different changing room to those not in the first team bubble.

Their next game is on Friday against Arsenal where Shoretire will expected to be involved despite training with the first team.

Solskjaer closely watches the progress of those in the U23s and there is regular dialogue between the Norwegian and Neil Wood and Nicky Butt, who oversee the youngsters.

Shoretire was first promoted to first team training over Christmas while the academy players were given some time off and Solskjaer continues to be impressed with what he has seen from the 17-year-old, and has moved him into their bubble ahead of the FA Cup clash against West Ham.

What’s been said about him?

Neil Wood, under-23s manager: “With Shola what impresses me the most is that he’s a very good technical player, and Shola has always played up a year throughout his whole academy life, I can’t remember him every playing in his own age group.

“Whatever you ask him to do on and off the ball he’s going to do it and you can trust him to do that job. He’s doing excellent for the age of him.

“I’m not expecting him to be man of the match and be the main figure of the team because he’s so young, but he’s not going on that pitch and drowning or anything he’s probably been one of our most consistent outstanding performers throughout the season.”

How’s he been getting on this season?

What is his nationality?

Shoretire has made two appearances for England at under-16 level.

Mon Feb 8 , 2021
The Camp Nou coach had spoken last year of his desire to sign Memphis Depay from Lyon, but is now unhappy the boot is on the other foot Lyon coach Rudi Garcia has hit out at his Barcelona counterpart Ronald Koeman over his criticism of Paris Saint-Germain and their pursuit of […] 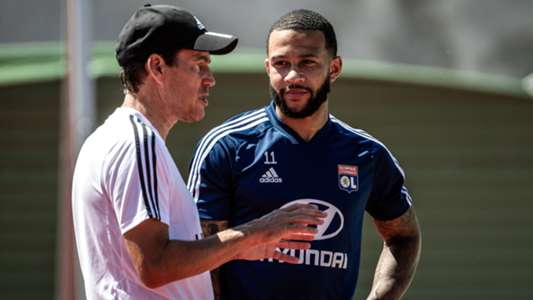