43′ For all of Barcelona’s possession, Sevilla continue to look the more dangerous side when they turn over the ball. There are just two minutes of the first half left to go.

41′ CHANCE! En-Nesyri engages in a foot race with Umtiti. He speeds past the Barcelona defender but trips at just the wrong moment, meaning he does not manage to get a shot away with only Ter Stegen to beat.

39′ There is a short stoppage in play now as the referee is having some difficulties with his headset. Sevilla are looking pretty comfortable as we fast approach the midway point at the Estadio Ramon Sanchez-Pizjuan.

37′ Kounde is everywhere at the moment – Barcelona cannot contain the defender. The ball arrives in the Barca penalty area but En-Nesyri is beaten to it in the air by Mingueza.

35′ There is no real urgency to Barcelona’s game at the moment. Koeman will know that this tie cannot be won and lost today, so perhaps that is part of his thinking. 1-0 would not be a disastrous result for the visitors.

33′ Koeman’s side have had 55 per cent of the ball but have managed only a couple of shots on target. Kounde’s impressive goal is the difference between these two in-form sides with more than three-quarters of the tie to go.

31′ Barca are remaining patient in their pursuit of an equaliser. The visitors have created just one chance of note thus far, with Messi unable to beat Bounou from a one-on-one position.

29′ Mingueza swings a leg at the ball in an attempt to take it off Rakitic but only succeeds in catching his opponent. The Barcelona defender is a little lucky to avoid being shown a yellow card there because Sevilla were on the counter.

27′ That was a lovely touch from Kounde to take the ball around Umtiti, basically wiping out Barca’s entire defence in the process. That was hardly the finish of a central defender, either!

25′ GOOOOOAAAAALLL!!! SEVILLA 1-0 BARCELONA!! Kounde gave Barca a warning with his shot a little earlier and has now punished the visitors with the breakthrough goal. The defender knocks the ball past Umtiti and calmly fires away from Ter Stegen, who gets something to the shot but is unable to keep it out.

24′ Barca have dominated possession since that Kounde chance five minutes ago. A deep cross into the box is gathered by Bounou before Junior can get his head to it.

22′ OVER! Messi and Dembele exchange passes on the edge of the box and the former decides to have a go from 20 yards. He gets his attempt all wrong, though, and the ball ends in the stands behind the goal.

20′ JUST WIDE! Suso turns his opponent inside out and cuts the ball back for Kounde, who is stationed high up the pitch following a free-kick. The defender’s first-time shot spins just past the post with Ter Stegen looking a little worried.

18′ Alba gets in behind down the left for the first time today. The full-back is unable to pick out a team-mate but the loose ball falls to De Jong. He gets a shot away and it is blocked into the air before being cleared.

16′ Barcelona forward Lionel Messi has not won any of his two previous competitive games against Sevilla defender Jules Kounde, failing to score in both matches from seven shots.

14′ That really was a great save from Bounou to keep out Messi. The Barcelona forward did not exactly hit the ball straight at the Sevilla keeper – he picked his spot but came out second best on this occasion.

13′ GREAT SAVE! This is nearly a sublime opener for Barcelona. Griezmann has space to shoot around 30 yards from goal but instead lifts the ball over the Sevilla defence and Messi meets it with a first-time shot. Bounou keeps out the attempt with his left leg.

11′ Barcelona are certainly favouring their right-hand side, where Dembele is often picking up the ball in a bit of space. He sprays a pass into the feet of Messi and the Argentina international passes to Pedri, whose throughball for Griezmann is overhit.

9′ The game is being played at a pretty frantic pace at the moment, but there has not yet been a chance or indeed a shot at either end of the field.

7′ Rakitic slides the ball through for En-Nesyri but it has a little too much pace on it and Ter Stegen can collect.

6′ The home side have now settled into the game. Julen Lopetegui’s men are knocking the ball around without really looking to get it into advanced positions.

4′ Barcelona have made a bright start to the match, pressing their opponents high up the pitch. Junior is looking lively in behind down the right.

3′ Messi thinks about taking on the shot but is forced away from goal. It is instead worked to Dembele on the right and he has Junior on the overlap, though the attack soon breaks down.

1′ KICK-OFF! Barcelona, the record 30-time winners of this competition, get us up and running at the Estadio Ramon Sanchez-Pizjuan.

Both sets of players are now out on the field and we are moments away from kick-off. These two sides are in superb form, winning their last 13 matches between them, but something has to give in this tight-to-call first leg.

Ronald Koeman has made five changes to Barcelona’s starting line-up from the 3-2 win at Real Betis three days ago. Ronald Araujo, Miralem Pjanic and Martin Braithwaite all picked up injuries in that game and miss out on the squad today, while Puig and Lenglet drop to the bench. Junior has been drafted in at right-back, meaning Mingueza will partner the returning Umtiti in the heart of defence. Big-hitters De Jong, Pedri and Messi are also recalled.

Sevilla show three changes from their 3-0 win over Getafe in LaLiga last weekend. Fernando and Rakitic return to central midfield, the latter having served a one-match ban last time out, while January signing Gomez is recalled alongside En-Nesyri and Suso in attack. Torres and Gudelj drop to the bench, while injured winger Lucas Ocampos is not involved at all.

The home side have yet to concede in the five previous rounds to make it to this stage, most recently seeing off Almeria 1-0 in the quarter-finals. As for Barca, they salvaged extra time against Granada in the last round before prevailing 5-3 in a thriller.

Sevilla enter this contest on a seven-game winning run in all competitions, keeping a clean sheet in the last five of those, while Barcelona have themselves won six on the spin.

Hello and welcome to our live text coverage of the Copa del Rey semi-final first leg between Sevilla and Barcelona at the Estadio Ramon Sanchez-Pizjuan.

Wed Feb 10 , 2021
The Citizens continued their imperious run of form with a straightforward defeat of Swansea in the FA Cup fifth round on Wednesday evening Manchester City set a new benchmark in excellence on Wednesday with their 15th straight win in all competitions, a mark no other English top-flight side had previously […] 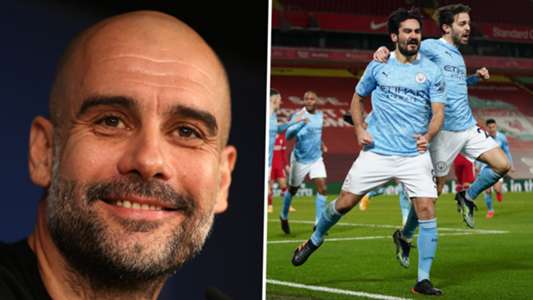