The 32-year-old is set to leave Serie A after falling out with manager Gian Piero Gasperini, but plenty of clubs are thought to be interested in him

Sevilla want to sign Alejandro ‘Papu’ Gomez from Atalanta, sources have confirmed to Goal, but they face a struggle to get a deal done with plenty of competition for his signature.

The Argentine has scored 50 Serie A goals in 209 appearances since joining Atalanta in 2014, but is set to leave the club after falling out with manager Gian Piero Gasperini.

Gomez has not played since mid-December after an argument during a Champions League group stage match with Midtjylland, and has trained separately to the rest of the squad.

In December, Goal reported that Gomez had asked to be sold to AC Milan or Inter, while Paris Saint-Germain had also emerged as an option.

Sevilla have now entered the race but, with the 32-year-old having a contract until 2022, the Serie A side are asking for a considerable transfer fee.

Atalanta want around €15 million (£13m/$18m) for Gomez, with Julen Lopetegui’s side hoping to bring that figure down. That task could prove more difficult if another club comes in with an offer but Sevilla do have one advantage, with Atalanta unwilling to listen to offers from any of their Serie A rivals.

Atalanta are currently sixth in Serie A after third-place finishes in each of the last two seasons but, only one point off third with half the season still to play, have no desire to strengthen a competitor with one of their star players.

They have fared well without Gomez, winning four and drawing three of their seven league games since he went into exile, but they would understandably prefer to see him move abroad.

If he were to leave on loan, Atalanta would demand a mandatory purchase option to prevent the possibility of him running down his contract and joining a Serie A rival on a free transfer.

Gomez, meanwhile, wants to join a club of enough stature to allow him to fight for a place in Argentina’s squad for the next Copa America, which would be his first major tournament for his country.

He would be able to play for Sevilla in their Champions League last-16 tie with Borussia Dortmund after recent changes to UEFA regulations, while Lopetegui’s side are having a good season, currently fifth in La Liga.

Gomez has been close to joining Sevilla in the past but, expected to sign under Jorge Sampaoli in 2016, the club opted to sign Franco Vazquez instead.

Fri Jan 22 , 2021
The Nigeria international has been given the green light to rejoin the rest of the Parthenopeans after overcoming the coronavirus Napoli have confirmed Victor Osimhen has recovered from Covid-19 having been under treatment for more than two weeks. The Nigeria international has tested negative to the coronavirus after spending more […] 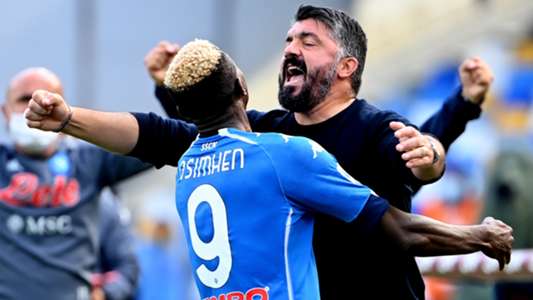