And against Hyderabad FC on Monday, ATK Mohun Bagan delivered a performance that will have made supporters believe in that saying. The Mariners failed to pick up a win against a 10-man Hyderabad despite playing for over 85 minutes with the numerical advantage.

For the neutral football lovers, the contest was an exciting, edge-of-the-seat thriller with plenty of twists and turns. But at the end of ninety minutes, although the Nizams will be pleased to have claimed a point from a game they played with 10 men but they also have every right to feel as if they dropped two points due to how the contest looked like it would swing in favour of Manuel Marquez’ side. Poor defending was a key ingredient in this thriller’s recipe as three out of the four goals scored on the night was a direct result of errors at the back.

It took just five minutes for the tale to come up with the first major twist. Chinglensana Singh had an early bath when Roy Krishna flicked Carl McHugh’s long ball in behind the Hyderabad defence for David Williams to chase. Onaindia got his defensive header all wrong and forced the Indian defender to make a split-second decision before the forward entered the box. The decision was to bring him down and the result was a straight red card.

This should have been Bagan’s cue to start scoring goals but the first goal came from the opposite end of the pitch. Aridane Santana pounced on to a poor backpass from Pritam Kotal and found the net to break the deadlock three minutes after Sana was sent off.

Hyderabad ended the game with more shots on target than Bagan and considering the kind of chances they created against the league’s best defence, they should have been more than a goal ahead going into the break. Even in the second half, for all of the flair that Liston Colaco provides when he gets on the ball, he failed to find his teammate Halicharan Narzary who was free to score inside the box on two occasions and the youngster showed why he may not ready yet to start games week in week out.

It is no secret that the Mariners are second-half specialists this season. They have now scored 23 out of their total tally of 28 goals after the break and there seems to be no stopping them in the second half.

Manvir Singh scored the first equaliser of the game and it was another poor header by Onaindia that started the move. The Hyderabad centre-back failed to head a long ball clear, allowing Williams to feed Manvir into the box. The Indian striker, who has been impressive for the Mariners in a wide role on the right flank, timed his run perfectly and finished with aplomb from a narrow-angle. Goalkeeper Laxmikant Kattimani was also at fault as he not only failed to time his movement correctly but also conceded easily at the near post.

An Akash Mishra throw-in from the left flank proved to be too tough for the Bagan defence to clear, especially with a towering Santana acting as the target man. The striker headed the ball into the path of Roland Alberg who found the bottom right corner to give Hyderabad hope and a slender lead to hold on to for the final 15 minutes.

However, Kattimani was not done making mistakes in goal. He spilt Jayesh Rane’s cross into the box from the left flank straight into the path of Kotal who atoned for his error earlier in the game with a tap-in.

Bagan may have scored the final goal of the game but the draw acts as a wake-up call for Habas’ men before the playoffs. A win could have sealed their top spot and a place in the AFC Champions League but they need at least a draw in their last game against Mumbai City now and the ISL is set for an exciting final matchday with the League Shield winner and two playoff spots undecided.

Hyderabad, at no point in the game, looked like they were under pressure because they were a man down. The talented team now needs to beat FC Goa in their final game to get into the playoffs and they have to do it without the likes of Chinglensana and Santana who will be suspended. It could be a tough outing against the Gaurs but Manuel Marquez’ Hyderabad will be up for the challenge.

Tue Feb 23 , 2021
Mashoor Shereef has settled in well at NorthEast United in his first season in ISL… Former Manchester United Kavungal (a local team in Malappuram) forward Mashoor Shereef is now proving to be an extremely useful addition in the NorthEast United defence as Khalid Jamil’s team chase the playoffs.  The forward-turned-defender, who […] 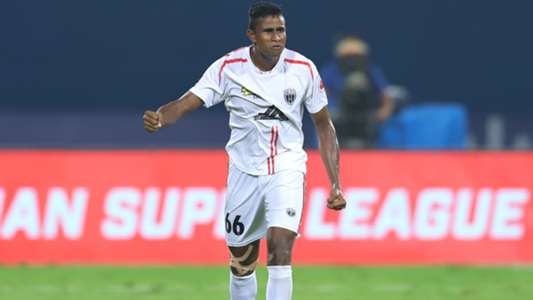