Schalke 04 have confirmed the return of Nabil Bentaleb to their first-team after he was barred for two months as they aim to survive relegation.

Bentaleb was handed an indefinite suspension by the Bundesliga club alongside Moroccan playmaker Amine Harit in late November, but Harit was recalled earlier after he trained alone for two weeks.

The 26-year-old midfielder who has played in seven league matches this season, met with coach Gross for a chat before he was reinstated.

He has started training immediately and he is in contention to make the Royal Blues’ trip to Union Berlin for Saturday’s league match.

Schalke 04, currently on a six-game winless streak in all competitions, are rooted to the bottom of the league table and their only Bundesliga victory in the 2020-21 campaign was against Hoffenheim on January 9.

“Nabil Bentaleb returns to training for the first team. After a conversation with Christian Gross, the head coach decided to bring the midfielder back into the team. A return to the matchday squad is also possible,” the club statement read.

Bentaleb has been at Schalke 04 since 2016, after leaving Tottenham Hotspur but he returned temporarily to the Premier League in the second half of last season where he made 12 league appearances for Newcastle United.

Following his indefinite suspension from the first-team in November, the Algeria international described the club’s decision as ‘without any credible justification’ and he thanked his national team coach Djamel Belmadi for his support amid public criticism.

Wed Feb 10 , 2021
43′ For all of Barcelona’s possession, Sevilla continue to look the more dangerous side when they turn over the ball. There are just two minutes of the first half left to go. 41′ CHANCE! En-Nesyri engages in a foot race with Umtiti. He speeds past the Barcelona defender but trips […] 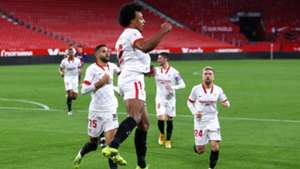