Wakiso Giants head coach Douglas Bamweyana has claimed the 2-2 draw against Sports Club Villa in the Ugandan Premier League was most painful to take.

The Purple Sharks took the lead in the 12th minute when Kipson Atuheire scored before Joseph Nsubuga added the second in the 28th minute on Wednesday.

The Jogoos responded in the second half as Abdalla Salim netted twice. He scored the first goal in the 54th minute before he added the second in added time to ensure the tie ended in a draw.

“This is probably one of the most painful draws one can have to take because we could easily have scored 12,” Bamweyana said after the hotly-contested match according to Sports Nation.

“We had up to eight good opportunities in the first half and more in the second but it was not our day because, despite that, we had a healthy lead and somehow lost it.

“We certainly have to work on our maturity and we probably helped our players with their directness and errors they showed by us controlling a few things.”

The tactician also stated the record Premier League champions did not deserve even the point from the draw.

“It is not the first time it [squandering a lead] is happening but we have to act upon it,” he added.

“We made a mess of few things against Sports Club Villa but they honestly didn’t deserve to take anything from the game.

“This is unfortunate and unfair but that is how football is.

“Yes we wasted a lot of chances but still we had a healthy lead of 2-0 which could have won us the game. We only had to show a little bit of composure and maturity in defence.

“We errored here and there, kicking the balls direct to them in our own area but on a general note they never deserved to take anything away from this game.”

Wakiso Giants remain unbeaten in the competition and will be up against Ugandan Revenue Authority in the next game that will be played away.

After seven games, where they have won once and recorded six draws, the Purple Sharks are 11th in the 16-team table. 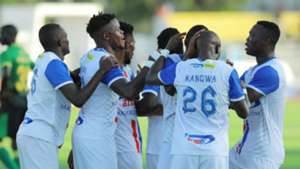