Nobody could have imagined the question would have ever been asked when Mohamed Salah was hastily sold by Chelsea permanently in 2016, but is the Egypt attacker Africa’s finest to play in the Premier League?

After a largely torrid time in West London, followed by a couple of loans at Fiorentina and Roma, the Blues let him leave for the latter. If anyone intimated at the time the forward will be crucial to Liverpool’s ascent to Premier League glory as well as in claiming another Champions League crown, such a prediction may not have been taken seriously.

Be that as it may, Salah has not only been a vital cog in the Reds’ first top flight crown in three decades, he’s shattered several club and PL records to sit among the Merseyside outfit’s greats and arguably thrown his name in contention as the continent’s finest to grace the English game.

This sort of debate, as is usually the case, tends to be subjective with opinions tending to vary. Two names who wouldn’t be in contention are Samuel Eto’o and George Weah, despite their obvious standing as Africa’s all-time greats.

It’s a shame the pair didn’t grace the PL in their respective primes, with the Cameroon legend only moving to Chelsea months after his 32nd birthday in 2013. Liberia’s most-accomplished star did when he was 33, playing fewer than 20 games in total at the Blues and Manchester City at the turn of the millennium.

Both players may be unsurpassed on any list of African greats, but they take a backseat when it’s narrowed down to Premier League football alone…they simply didn’t star in the division long enough or at their very best to be in contention.

It gets a tad more interesting and greatly based on personal perception from here on out.

The average observer could name Didier Drogba, and for good reason. The Ivory Coast powerhouse intimidated defences at his peak with some old-fashioned centre-forward play and clutch goals across two spells in West London.

While the Blues icon wasn’t necessarily a consistent goal scorer, he was a scorer of great goals which proved hugely significant in winning two Golden Boot awards, as many as Salah already has after only three full seasons on Merseyside.

Nigerian pair of Nwankwo Kanu and Jay-Jay Okocha may get a shout for their accomplishments at Arsenal and Bolton Wanderers respectively. Despite barely featuring, the former was part of the Gunners side that went an entire season unbeaten, with his best football coming in the late 90s and early 2000s where Arsene Wenger’s side claimed the Double in 2001/02.

Subsequently, Kanu was prominent in 04/05 as West Bromwich Albion became the first side to survive relegation after being bottom at Christmas, while the importance of winning Portsmouth’s first FA Cup crown in 69 years can’t be overstated.

As for Okocha, there weren’t trophies to distinguish arguably the continent’s greatest natural talent but his impact in making Bolton an established top flight side after their initial struggles made him so popular at the University of Bolton Stadium.

Midfielders who largely revolutionised the role of box-to-box midfielders, Michael Essien and Yaya Toure, made great strides outside the continent to be worthy candidates.

The Ghana icon was a driving force in the early days of Roman Abramovic’s dominant Blues that dominated in England in the mid-to-late 2000s. The Bison was sadly slowed down by injuries, but he made his mark, nonetheless, notably nominated for the FIFA World Player of the Year and Ballon d’Or nominations between 2005 and 2007.

Yaya, however, outdid Essien by playing an outstanding role in putting Manchester City on the map. While Sergio Aguero’s last-gasp strike against Queens Park Rangers in 2012 has left an indelible mark on supporters, it was City’s Ivory Coast unstoppable force who netted the important strike a year earlier to end the club’s 35-year wait for a major trophy.

He went from strength to strength at the Etihad Stadium, producing arguably the division’s all-time performance by a midfielder in 2013/14, when he rivalled Luis Suarez’s amazing 31-goal season as the Cityzens claimed their second title in three years.

Notably, Yaya was named African Footballer of the Year a staggering four times during his City spell, emphasising his sheer dominance in the 2010s.

It would be remiss to not mention his brother, Kolo, who overcame initial ropey performances at Arsenal to form half of the centre-back pairing that went an entire campaign unbeaten in 04/05; thereafter growing into one of the continent’s solid central defenders.

The elder Toure had his career besmirched at Man City following a failed drugged test in 2011 but the two-time Premier League winner made his mark, regardless.

Lauren and Lucas Radebe also starred in the English game with Arsenal and Leeds United respectively, and are arguably the most-celebrated African defenders in PL history.

The Cameroon icon claimed the Double on two occasions under Wenger and was equally prominent in that vaunted Invincible campaign. Radebe, on the other hand, attained cult hero status at Leeds for his amazing consistency for the Whites in the 90s. Even Sir Alex Ferguson came calling…what might have been?

Notable mentions go to Yakubu, the Nigerian forward who proved his scoring prowess at lesser sides, Emmanuel Adebayor, the forthright Togo icon who wasn’t Gooners’ cup of tea and Geremi, who did his bit despite the influx of talent after everything changed at Chelsea.

There’s also the strange tendency to forget about Mane’s influence in taking Liverpool back where they feel they’ve always belonged, with observers tending to make him the Robin to Salah’s Batman.

The forwards have pushed each other since they became teammates under Jurgen Klopp, forming part of a forward line that’s terrorised rearguards domestically and on the continent.

Excitingly, the Senegal star sits on 91 PL goals, with the Egyptian only one behind as they look to supplant Yakubu (95), Adebayor (97) and Drogba (104) as the highest-scoring African forwards in the English top flight.

Salah, a two-time African Footballer of the Year and two-time PL Golden Boot winner has come on in leaps and bounds since the late 2010s, losing the supposed shyness at Stamford Bridge to become one of the devastating forwards of his generation.

So, where does he rank in the pantheon of African icons to grace the Premier League?

Thu Feb 11 , 2021
German Vaya Ballabriga ‘Mani’ has worked with the Catalan giants for several years and believes a raid on the ranks at Sevilla could be beneficial Barcelona have been urged to launch a raid on Sevilla for Bryan Gil, with the scout that helped to discover Andres Iniesta and Ansu Fati at […] 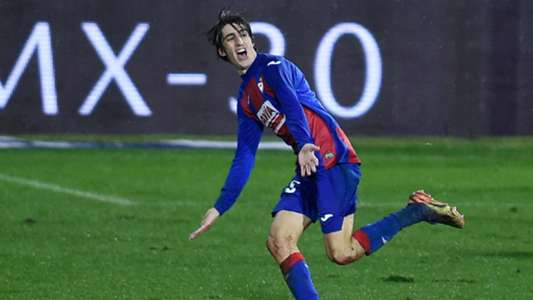