Mohamed Salah has been announced as the winner of the Liverpool Player of the Month award for December 2020.

The 28-year-old has been rewarded for the eye-catching displays after he was overwhelmingly voted as the club’s best player for the month.

Salah saw off competition from Brazil duo Fabinho and Roberto Firmino to clinch the individual accolade.

The forward has expressed his appreciation to the Reds fans for choosing him as their best player and hopes to continue to his fine displays for the rest of the season.

“Thank you very much. It’s nice but we just need to win some games from the games coming,” Salah told the club website.

“The situation is not great at the moment but we just need to focus on each game and stay together and carry on.

“I want to thank them [the fans] very much and tell them thank you very much for voting for me. We just need to stay together, supporting the team, and I’m sure everything is going to be fine.”

Salah has been delivering spectacular performances since teaming up with the Anfield outfit from AS Roma in the summer of 2017.

The forward has twice won the Premier League Golden Boot since joining Liverpool and played a key role as the club won the Champions League and Premier League titles.

Salah has scored 17 goals and provided four assists in 26 appearances across all competitions in the current campaign.

The forward will be expected to deliver another fine performance when Liverpool take on Manchester United in the fourth round of the FA Cup tie on Sunday.

After the Cup tie, Salah will hope to help the Reds see off Tottenham Hotspur in their next Premier League game on January 28.

The 28-year-old remains a key member of the Egypt national team and has continued to play a pivotal role in the Pharaohs’ 2022 Africa Cup of Nations qualifiers. 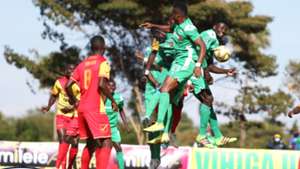