The midfielder has eulogised over the qualities of his former team-mate, who left the Santiago Bernabeu for Juventus in 2018

Portugal great Ronaldo became Madrid’s all-time leading goalscorer during nine prolific and trophy-laden seasons at the Santiago Bernabeu between 2009 and 2018.

Madrid sanctioned a big-money sale to Juventus after winning a third Champions League title in as many years, and fourth in five seasons, and Los Blancos stumbled in their first campaign without their talisman in 2018-19.

This season, which was disrupted for three months by the coronavirus pandemic, remains on a knife-edge. Madrid are second in La Liga and two points behind leaders Barcelona, while they trail 2-1 in their Champions League last-16 tie against Manchester City.

Modric, who briefly interrupted the Ronaldo-Lionel Messi monopoly of the Ballon d’Or by winning the prestigious individual prize in 2018, concedes the absence of Ronaldo’s qualities have been felt.

“Talking about the player seems trivial to me – he is among the best ever,” Modric told La Gazzetta dello Sport.

“We missed his goals and character at Real. Cristiano always wants to win, he motivated us and made us react.

“As a person then he is 10. He has a big heart and is always ready to help those in need.”

Modric, now 34, has seen his future in the Spanish capital become the subject of debate over the past 12 months and he was strongly linked with a move to Inter in the close season.

However, more recent reports suggested he will see out the rest of his Madrid deal that runs until the end of the 2020-21 season.

Modric believes he can continue to compete at the highest level and wants to end his career at Madrid.

“I’m sure I can play at a high level for two more years, then we’ll see. I would like to end my career at Real, but it will also depend on the club,” he added.

“Of course, I’ll do the coaching course. For us, the national team is a feeling above football, both as a player and as a coach I’d be honoured to be there.”

Mon Jun 15 , 2020
Van de Beek challenges Carvajal. CHEMA REY Former Ajax and Barcelona player Ronald de Boer has revealed that Real Madrid are interested in signing Donny Van de Beek and that the current Ajax midfielder would also like to sign for Los Blancos. The Dutch midfielder has many suitors with both […] 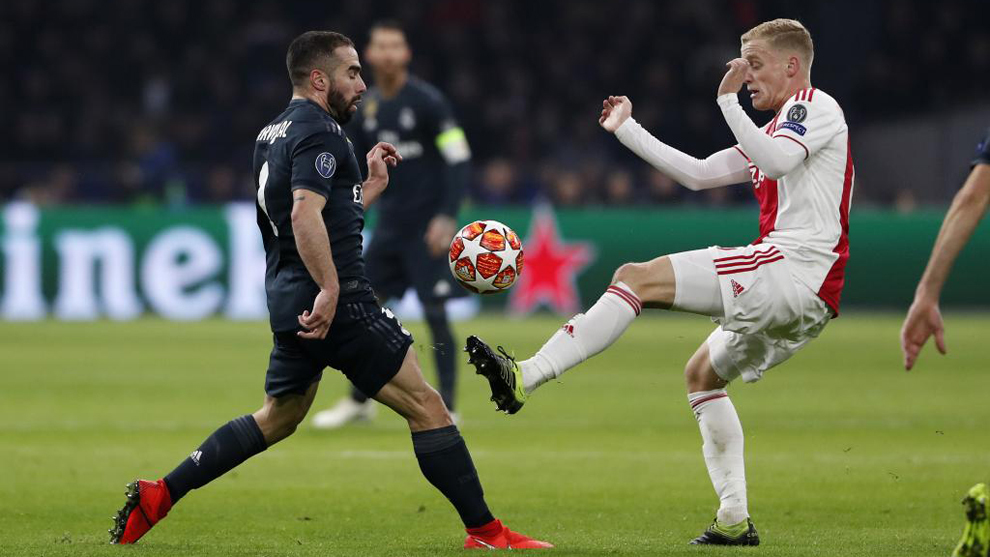