Cristiano Ronaldo is “a player out of the norm” like Zlatan Ibrahimovic says former Real Madrid and Paris Saint-Germain fitness coach Giovanni Mauri, with two evergreen forwards being backed to play on beyond the age of 40.

The enigmatic Swedish striker on the books at AC Milan is fast approaching that mark. Ibrahimovic, who has been hinting at another contract extension with the Rossoneri, will turn 40 on October 3.

Ronaldo, meanwhile, is celebrating his 36th birthday on February 5, with the Portuguese star showing no sign of slowing down at Juventus.

Remarkable standards are being maintained by the five-time Ballon d’Or winner, with iconic spells at Manchester United and Real Madrid being followed by another in Turin.

Mauri worked with Ronaldo at Santiago Bernabeu, having formed part of Carlo Ancelotti’s backroom staff at various clubs, and was left in awe at Ronaldo’s ability and application.

Similar qualities were spotted in Ibrahimovic at PSG, with two modern day icons now following in the footsteps of Paolo Maldini, Alessandro Costacurta and Ryan Giggs.

Mauri told Tuttosport of Ronaldo and the longevity that he can enjoy: “When he arrived in Italy, I said he is a player out of the norm. He’s settled in and he continues scoring. He is following the method we proposed him in Madrid where rest is a fundamental part of the training.

“Rest doesn’t only mean to sleep. It’s not passive, but it’s made of specific exercises that aim to reach muscular, mental and articular wellness.

“I’ve worked with many footballers on their forties, from Maldini to Costacurta. When I was at PSG I was sure Ibrahimovic would have played until 40 years old. They are all athletes with great flexibility despite their strength.

“Ibra has got a dancer’s mobility despite a weight of almost 100 kg. Cristiano Ronaldo is part of this category and can play until he’s 40.”

Ronaldo has suggested in the past that he will look to extend his remarkable career for as long as possible, with plans to spend a fourth decade turning out at the very top of the global game.

Fri Feb 5 , 2021
Tusker FC 1-0 Wazito FC: Macharia strikes at death to win it for Brewers The Ruaraka-based side are now on 26 points after 11 games, four more than second-placed KCB Jackson Macharia scored the lone goal in the stoppages to help Tusker defeat Wazito FC 1-0 at Kasarani Annex on […] 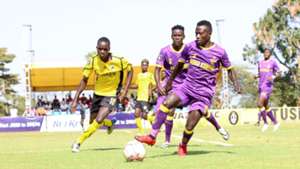