Former chairman of the Nigeria Football Federation’s technical and development committee, Chris Green, believes Gernot Rohr does not have the technical know-how to get the best out of the Super Eagles players.

The German tactician has been in charge of the three-time African champions since 2016 and in his first assignment, he guided the side to the 2018 World Cup in Russia with ease.

The Super Eagles, however, failed to live up to expectations at the global tournament, as they were eliminated at the group stage.

Rohr then led the West African giants to a third-place finish at the 2019 Africa Cup of Nations in Egypt.

Green, however, believes the 67-year-old does not have the knowledge to guide the Super Eagles to success at the world stage.

“We are far from where we are supposed to be, and average in the sense that with fantastic and talented players we are not getting the best out of these players technical-wise,” Green told Punch.

“First and foremost, I do not know his philosophy, the technical prowess he could exhibit in a game when faced with very stiff opposition.

“Ordinarily, with the kind of players we have, we should be a hard nut to crack when it comes to playing in Africa and globally.

“We got our worst result at the World Cup during his time and we couldn’t get to the second stage. With due respect to the Argentines, we had a lame Argentine team to beat because they were there for the taking, but of course, technically we lost it.

“We came to the Africa Cup of Nations and we also saw it coming when Madagascar beat us but we struggled to get to the semi-final but we also lost it again because of lack of technical depth in our team.

“I am not saying Rohr is not a coach but he doesn’t have that thing that will make us world-beaters.

Rohr is on the verge of guiding the Nigeria national team to the 2022 Africa Cup of Nations in Cameroon as they currently lead Group L with eight points from four games.

A victory over either the Republic of Benin or Lesotho in March will seal Nigeria’s place at the continental tournament.

Sat Feb 6 , 2021
The Gunners boss felt decisions went against his team as they were beaten 1-0 at Villa Park in the Premier League An angry Mikel Arteta opted to keep his mouth shut rather than taking aim at the officials after Arsenal’s 1-0 defeat at Aston Villa on Saturday. The Spaniard confronted […] 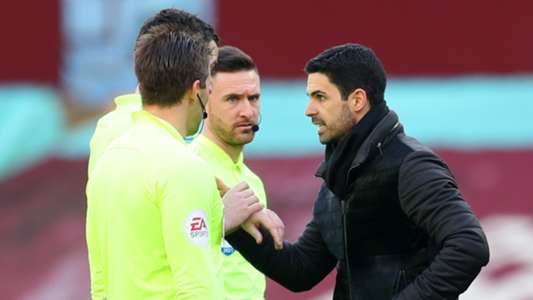