After winning the first title at Wimbledon in 2003, Roger Federer was in another final at the All England Club a year later. In the semis, Federer took down Sebastien Grosjean 6-2, 6-3, 7-6 in two hours, setting the title clash against Andy Roddick.

Like in the previous five matches at Wimbledon 2004, Federer had the upper hand on both serve and return, suffering only one break of serve and taking almost half of the points behind Grosjean’s initial shot to earn five breaks and seal the deal in straight sets.

Federer had more winners than unforced errors, staying in touch with Grosjean in the shortest rallies and dominating more advanced exchanges to move over the top and stay on the title course.

Sebastien fended off two match points in the tenth game, earning a break in the next one for a 6-5 lead and serving for the set.

“It feels great to be in another Wimbledon final. It’s my third Major final and I’m thrilled. I can’t wait to try to defend the title. I’m still young and I need more time to call the Centre Court my home.

It’s a pleasant experience to play there. When you win some big tournament, the people realize what a great job you did. Matches like the one I played today, I look at them as oners I have to win, pushing myself even harder to perform well.

Once the tournament gets underway, everything comes naturally for me. These are the moments I work hard and live for; that’s why I’m nervous ahead of every notable final. People told me Pete Sampras had 23 straight wins on grass, and I was on 22 before this encounter.

Now, I have a chance of winning the second Wimbledon crown and move in front of Pete; the grass suits my game and would love to extend the streak. This year has been fantastic for me; I can’t figure out how I came to be so dominant.

I know my rivals would give everything to beat me and I step on the court with the same attitude, knowing I can lose if I don’t play at my best. There’s still room to improve my backhand. In the past, I would be lazy and a little slow; now, I’m in a better position on the court and I don’t have to hit defensive slice backhands, there’s more variety in that shot.

Last year’s semi-final at Wimbledon was incredible and this one was different, with rain delays and tough conditions. I’m a better player than 12 months ago and I know what it takes to win the title.” Staying focused, Roger Federer pulled the break back and won the tie break 8-6 to emerge at the top and reached back-to-back Wimbledon finals.

Sun Jun 14 , 2020
LaLiga Away games for Barcelona and Real Madrid LaLiga LaLiga have released the schedule for matchday 32 of the 2019/20 season, which will take place from June 26 to June 29. It’ll start on the Friday night with Sevilla vs Real Valladolid and conclude on the Monday with Getafe vs Real […] 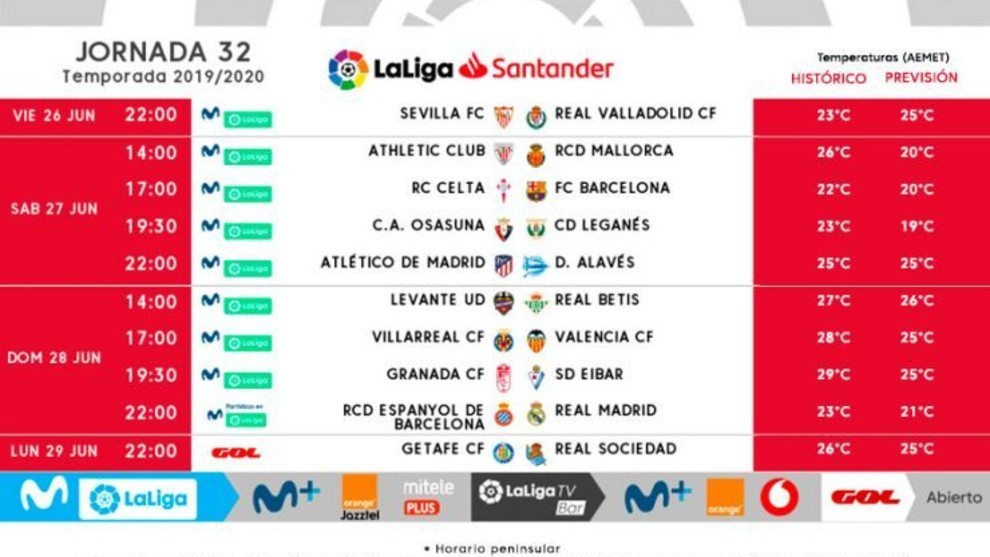