After experiencing the worst year of his career in 2013, Roger Federer made the decision to use a racket with the largest oval and to hire Stefan Edberg as coach instead of Paul Annacone. These changes have also had the desired effects in direct clashes with the eternal rival Rafael Nadal, the Swiss’s true nemesis until 2014.

The Swiss Maestro has won six of the last seven matches against the Spaniard, including the memorable Australian final Open 2017, which allowed him to return to winning a Slam almost five years after the last time. In a recent interview with Blick, Uncle Toni explained how Federer has often made tactical mistakes against Nadal in the past.

“Tennis-related: doing things like Roger Federer is very difficult. You have to accept this painful reality relentlessly. Before one of Rafael’s first matches against Federer, I told my nephew what Roger can do better.

Rafael Nadal reacted a little sourly. He used to let Rafael play and that should have been avoided. Back then I always said that Federer was wrong about his style of play and that he had to be much more aggressive on return and play at a much faster pace” – Uncle Toni explained.

“Since 2017, Federer has found a very effective system against Rafael. He used to block the serve many times, now he strikes back with speed. He also hits the backhand much faster, plays with a lot of anticipation. It works.

Roger has great aesthetics and an effortless style of play. He is lucky that he can and does everything very well from scratch. In the past, I preferred to watch him even more than today. Like Rafael, who has improved a lot on serve, Roger switched his game to do more and run less” – he concluded.

From 2006 to 2008, Federer and Nadal played in every French Open and Wimbledon final. Their 2008 Wimbledon final was lauded as the greatest match ever by many long-time tennis analysts. Their 2017 Australian Open final was one of the more highly anticipated major finals in tennis history, in part due to the relevance within popular discussions on their placement in greatest of all time listings, coupled with that fact that they were both already in their 30s, which is usually when most male players are on the decline or have already retired.

Mon Jun 15 , 2020
Date published: Monday 15th June 2020 7:26 The prospect of Philippe Coutinho returning to Liverpool has been given the thumbs up by Roberto Firmino. Coutinho wants to end his miserable stay at Barcelona after his blockbusting move there in January 2018 turned sour. TEAMtalk have been told by an Anfield insider that […] 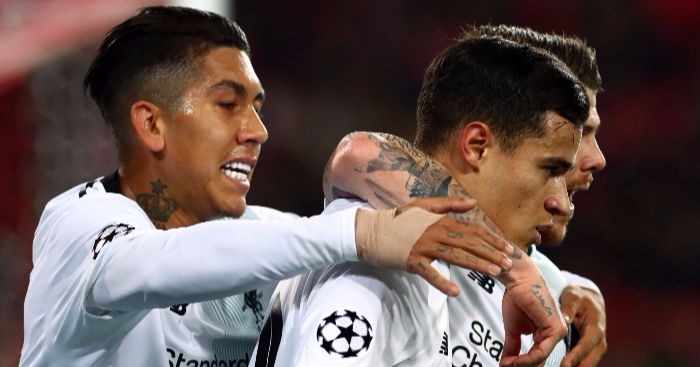