Thanks to the records and the titles achieved, to the effective style of play on every surface, to the technical accuracy of his shots, to the excellent performance over a long career, Roger Federer is considered one of the best tennis players of all time, as well one of the greatest sportsmen ever.

Gyan: ‘I have learnt serve and volleys from Roger Federer’

I think Roger Federer is good at that. He’s a master class” – Asamoah Gyan said. “I took the racquet and my first serve over the fence so I decided not to play. I went back to Italy, got some rackets, came back on holidays.

I played like once and I lost interest so it was like ten months ago I decided to play because I normally watch tennis and I said to myself I can play so that’s where I started. Honestly, I learnt that from him so anytime I’m in difficulties, I just try to place the ball to the corner and attack the net.

I think I’m special in that. That was what brought me into tennis”. The serve-and-volley style has reaped rich dividends for Roger Federer, especially on grass, the game’s quickest surface. “I serve and volleyed 80 percent on the first serve, 30 to 50 percent on the second serve,” Federer had said.

“It was just normal. I even did some in 2003 when I won first here. Then, every year I started doing less because the game started changing on the tour, really. I think (top) guys return a bit better these days. I think it might be a touch slower as well,” said Roger Federer, adding there was also an element of habit.

“Because those guys are looking for the rallies, you tend to just also do it because it’s comfortable; it’s nice to stay back there, serve, wait, hit the big forehand.” Federer is an all-court, all-around player known for his speed, fluid style of play, and exceptional shot making.

Federer mainly plays from the baseline but is also comfortable at the net, being one of the best volleyers in the game. He has a powerful, accurate smash and very effectively performs rare elements of professional tennis, such as the backhand smash and skyhook, half-volley, jump smash (slam dunk) and an aggressive serve return known affectionately as SABR (Sneak Attack By Roger, a half-volley attack on an opponent’s second serve).

Sun Jun 14 , 2020
The ex-India goalkeeper was earmarked for success from a very young age though he did have his doubts during a stellar career… Brahmanand Sankhwalkar is a legendary name in Indian football and one of the stalwarts from Goa to grace the sport. He began a celebrated playing career of 25 […] 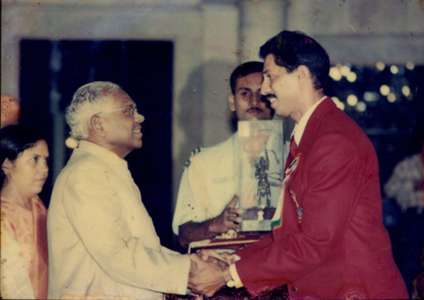