Leicester City coach Brendan Rodgers said Wilfred Ndidi’s chances of playing against Wolverhampton Wanderers are uncertain as he continues working to be available.

The Super Eagles midfielder is recovering from a hamstring injury he suffered against Everton in January and Rodgers said he is under medical supervision.

Even if he misses Sunday’s outing at Molineux, Ndidi has been confirmed ready to participate in the Foxes’ FA Cup fifth round clash with Brighton & Hove Albion on Wednesday.

“We’ll see with him over the next 24 hours, just whether it’s worth the risk or not,” Rodgers told the club website.

“He’s coming along very, very well. We’ll assess that. If not for the weekend, he’ll definitely be available for midweek (vs. Brighton & Hove Albion in the Emirates FA Cup Fifth Round.”

With Ndidi absent in the midfield, his compatriot Kelechi Iheanacho has impressed in filling Jamie Vardy’s void after the English forward underwent a minor hernia surgery last month.

The 24-year-old opened the scoring with his first Premier League goal of the season as Leicester City sealed a 2-0 victory over Fulham on Wednesday.

Vardy has been passed fit and available for Sunday’s match and when asked whether the club’s highest goalscorer may start with Iheanacho at Wolves, Rodgers said: “The beauty of it is we don’t have to. That’s the key. Kelechi, the other night, he was terrific in his work.

“He scored a great goal and he will be high in confidence. We all know Jamie is so important to us, but the beauty of it is, coming out of an operation, we don’t need to rush him.

“Just to have him available, whether to start or from the bench, it’s a huge boost for us. It’s not a problem. It’s great Kels has got his goal because he’s worked so hard.

“That’s not just in games he’s played, but every day in training, so he got his reward for that.”

Fri Feb 5 , 2021
The 18-year-old forward has been nursing a serious knee problem since November and remains some way off a return to action Ansu Fati has suffered a setback in his recovery from a serious knee injury, placing his involvement in Barcelona’s heavyweight Champions League last-16 clash with Paris Saint-Germain into serious […] 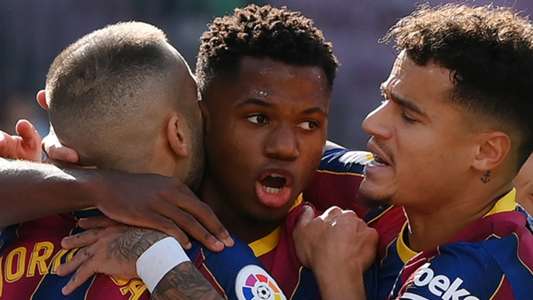