Kenya international Victor Wanyama is among the four players Comoros Football Federation claimed had tested positive for Covid-19 before their Africa Cup of Nations qualifier.

During the game played in Moroni on November 15, 2020, reports emerged four Harambee Stars players were set to miss the match after the Comoros Federation claimed they had returned positive results hours before the match kicked off.

After the decision by Caf to ban FKF CEO Barry Otieno and Harambee Stars team manager Ronny Oyando on Saturday after they were accused of tearing the PCR tests, Goal can now reveal the four players who were supposed to miss the match include captain Victor Wanyama, Brian Mandela, Ayub Timbe and Eric Johanna.

“Caf regulations clearly state when you leave your country for any away match you must test your players with Covid-19 and this must be done 48 hours before the match, and when we left Kenya, we had tested the same and no player returned positive results,” Otieno told Goal on Saturday after learning of his ban from Caf.

“When we arrived in Comoros and during the pre-match meeting, we asked that our players are tested again for Covid-19, but Comoros clearly told us they don’t have the capacity to test Covid, so we told them we will use the results which we had received while in Kenya.

“We moved to the hotel and on the day of the match, the match commissioner came to our hotel while the players are sleeping and he asked that we test the players, we told him how can you test players on matchday? Regulations don’t allow and you don’t need to bring us a doctor, you need to show us three facilities with testing kits and we will choose one for the exercise.

“Comoros and the match commissioner insisted they only have one hospital but we also told them our players are now sleeping and we could not want to disturb the programme of the team, we asked them to wait until they wake up but they argued and we moved to awake the players.

“They tested the players, but I asked them, now that you have tested these players, what time should we expect the results? They responded, by 4 pm the results will be ready.

“At 4 pm, there was no results yet, and we asked them but they insisted the results are coming, we left the hotel for the match venue and we entered the dressing room, as we prepared to walk to the warm-up, [Comoros had already done their warm-up], we were now told the results have come in and four of our players were positive.”

Otieno continued: “If you ask me, some of our players were already targeted, because the affected players were Victor [Wanyama], Ayub [Timbe], Brian [Mandela] and Eric [Johanna], if you look at the list, it was just malice and the players were targeted, they were our key players.

“Regulations allowed us to seek for another date, I went to the match commissioner and told him it is not a must we play this game now if indeed four of our players are positive, because it means even the entire squad could be positive now that they have been interacting together and the game should be called off.

“We asked for the game to be rescheduled and we also wanted to get another alternative hospital and test the players again because the Comoros Federation was the one having issues, and they want our key players to miss the match, but the match referee stood with Kenya, he said the tests had been conducted late and we can use the results we had from Kenya.”

On whether he moved to tear apart the PCR tests in front of the match commissioner, Otieno said, “I did not tear anything, I did nothing like that, in fact, I walked straight to the stands to watch the match.”

The game ended 2-1 in favour of Comoros denting Kenya’s hopes of making it to the finals.

Sat Jan 23 , 2021
The Odisha coach feels that Bengaluru interim Naushad Moosa is tackling the situation well post head coach Carles Cuadrat’s departure… Odisha have had a few encouraging performances in the 2020-21 Indian Super League (ISL) of late but there haven’t been enough of such matches to lift them off the bottom […] 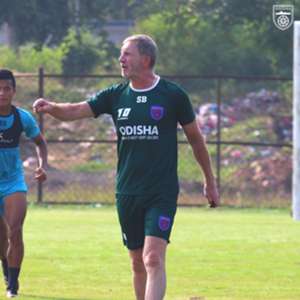