Gor Mahia’s trip to Zambia to play their Caf Confederation Cup fixture against Napsa Stars was on the verge of collapsing until ex-Nairobi governor Mike ‘Sonko’ Mbuvi stepped in to bail them out.

Goal can exclusively reveal the team was on the verge of not honouring the return leg at National Heroes Stadium in Lusaka as they did not have money to purchase tickets for the trip.

It is the reason their first attempt to fly out on a Friday collapsed as the club was yet to secure air tickets after the Football Kenya Federation, who had promised to help them, returned negative answers.

Goal has now obtained recorded audio of ‘Sonko’, who is admitted at a Nairobi hospital, speaking to the club’s chairman Ambrose Rachier after he gave the team USD5,000 to secure tickets for the trip.

“I am still admitted at a Nairobi Hospital but was upset to hear my beloved team is stranded and yet to travel to Zambia for the Caf fixture,” ‘Sonko’ told Rachier in the recorded conversation.

“I have been told by one Brian the team is stranded so I have decided to give some little support, at least USD5,000 to make sure the team travels, and I hope the money reached you,” ‘Sonko’ explained to Rachier, who responded by saying he had indeed received the money.

“You know me I am a Gor Mahia fan, and I don’t like seeing the boys suffering or getting stranded anywhere and Brian is a very good friend to me, he is like a brother to me? ‘Sonko further told Rachier.

In his response, Rachier thanked ‘Sonko’ for helping the team, and wished him a quick recovery.

“We appreciate your support and as a club, we are praying for your quick recovery.”

Gor Mahia did not reach the group stage of the competition as they drew the match 2-2 with Napsa Stars qualifying on a 3-2 aggregate win having won the first leg at Nyayo Stadium 1-0.

However, the match did not end well as Gor Mahia players accosted the match referee at the final whistle after he awarded a 94th penalty, which was converted by veteran Emmanuel Mayuka to dump them out of the competition.

K’Ogalo have now shifted their focus to retaining the FKF Premier League title and also the domestic Cup.

Wed Feb 24 , 2021
The Cameroon legend is about to complete 20 years as a goalkeeping coach at the Spanish side To speak about Thomas N’Kono is to speak about a footballing legend. The former Cameroon goalkeeper is currently a part of the RCD Espanyol coaching staff and it just takes one glimpse back […] 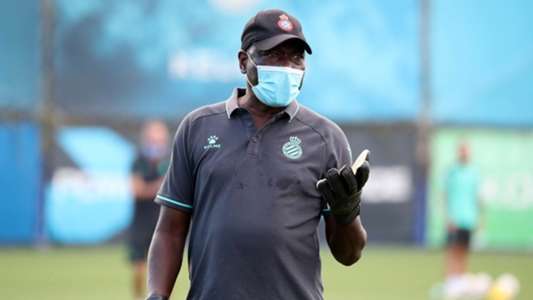