They did not offer much attacking threat against Celtic, but Rangers earned a priceless victory that moved them closer to league glory.

Rangers took a huge step towards winning the Scottish Premiership title as Callum McGregor’s own goal gave them a 1-0 Old Firm derby win over Celtic.

Steven Gerrard’s unbeaten team now lead their fierce rivals by a formidable 19 points at the top of the table.

Celtic still have three games in hand but their hopes of clinching a historic 10th straight title look increasingly slim, with this result piling the pressure on manager Neil Lennon.

Champions Celtic had the better of Saturday’s match at Ibrox, but the tables were turned when Nir Bitton was sent off after 62 minutes.

Callum McGregor then inadvertently gave Rangers, who did not register a shot on target in the contest, a priceless winning goal.

Celtic made an excellent start and it took two pivotal saves from goalkeeper Allan McGregor to stop the visitors from going into an early lead.

He impressively got down low to deny Odsonne Edouard, who had not played in the last meeting between the sides, which Rangers won 2-0 in October.

The Rangers keeper then produced an even better fingertip stop to tip a 25-yard shot from Leigh Griffiths that was destined to find the top corner onto the post.

Gerrard brought on Ianis Hagi – who had been dropped from the starting XI in place of Ryan Kent – at half-time, with Kemar Roofe coming off and his side gradually began to improve.

Rangers got a big boost when Bitton was dismissed after wrestling Alfredo Morelos to the ground as the striker attempted to race on to a James Tavernier pass and looked like he had a clear path to goal.

They moved in front after 70 minutes, Joe Aribo flicking a Tavernier onto Callum McGregor, whose arm deflected the ball beyond Vasilios Barkas.

Celtic substitute Mohamed Elyounoussi shot just over but there was no way back for the 10 men, who have now lost three straight league derbies for the first time since 2008.

Sat Jan 2 , 2021
The Red Devils have plenty of match-winners in their engine room, with a Portuguese playmaker saluting the Frenchman alongside him Bruno Fernandes remains puzzled by those who continue to doubt Paul Pogba’s ability and value to the Manchester United cause, with the World Cup winner catching the eye again in […] 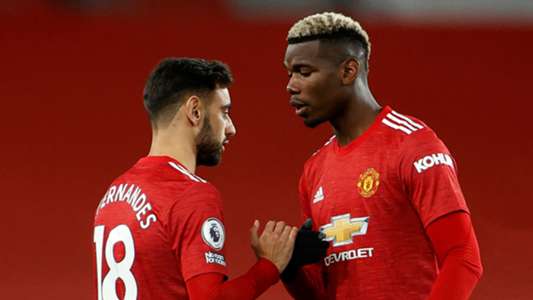