In July 2019, RoundGlass Sports became a co-owner of Minerva Punjab after a merger deal was signed by both parties. They took charge of the various age-group teams whereas, the erstwhile management headed by Ranjit Bajaj continued to look after the operations of the senior team. After the previous I-League season, Bajaj sold his entire stakes to RoundGlass to cap off one of the most sensational deals in Indian football history.

Unsurprisingly, the change in management has also ushered in a change in policy and vision of the club. The new think-tank believes that participating in the Indian Super League (ISL) is the way forward to compete at the highest level.

“You have to eventually end up playing in ISL. The roadmap is already there in place. We know about future promotion and relegation scenarios. The matter will be considered at a more appropriate time. But currently, we are focusing I-League,” stated Michael Browne, the technical director of the senior team.

Browne has had a distinguished career and has previously served as the head coach of the Aspire Academy in Qatar and was also led the national team scouting department of Qatar. Seven in the starting line-up of the Qatar team that trounced Japan 3-1 in the 2019 Asian Cup final to lift the Asian Cup trophy were graduates of the Aspire Academy. He has also worked as the academy director for Charlton Athletic in England.

He has been staying in India for over a year and has closely followed both the ISL and the I-League. After watching the leagues, he opines that the ISL has an edge over I-League in terms of quality of football as the better foreigners and Indians play their trade in the former.

“It is always difficult to compare between leagues. Yet, I feel the ISL has a better standard than I-League. The quality of overseas players is better. The best Indian players also play in ISL. We aim to be a successful club, be it in I-League or ISL. But we are not going to do that by signing expensive players. We are going to develop Indian players and make them good enough so that they can go on to play for the national team.”

Browne believes that the players with potential in India are not getting enough game time which is hindering their development. He suggests that it will be more beneficial for those to ply their trade in I-League rather than sitting on the bench in ISL.

“The best Indian young players do not get minutes. That is definitely not good for football in India. We hope to improve that. They must play consistently. Some Indian players should play in I-league and not in ISL as they are mostly benchwarmers which impedes their process of development.

“I think India’s potential is huge. But there are not many good quality games. The players should get more quality games. All key positions in ISL are occupied by foreigners. The country needs to get (more) games at the right level. If we can have a longer season with higher standard of games, it will greatly help Indian football. There is also talk about the reduction of overseas players. Doing that you create more opportunities for Indian players to shine. But we should also keep in mind that the standard must not go down,” concluded the UEFA Pro License holder.

Mon Jun 15 , 2020
The former Manchester United defender has singled out the Brazilian shot-stopper as the reason for the Reds’ recent record Gary Neville believes Alisson and not Virgil van Dijk is the main player to thank for Liverpool’s looming Premier League success.  Both players have been key for Jurgen Klopp this season with […] 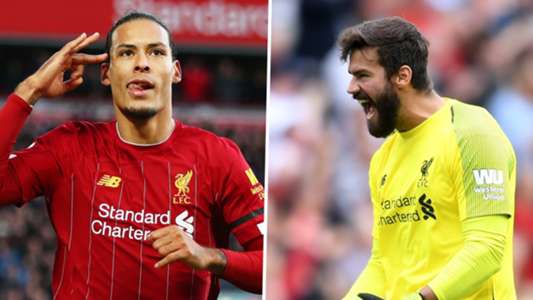