Two league matches were played on Sunday with Vhadau Vha Damani securing a win, while the Citizens were held at home

Swallows FC maintained their unbeaten record in the PSL when they drew 1-1 with Cape Town City at Cape Town Stadium.

The deadlock was broken just 13 minutes into the match and it was Kgaogelo Sekgota, who opened the scoring with a well-taken goal.

Sekgota cut inside from the right and curled the ball into the near-post to make it 1-0 to Swallows – netting his first-ever goal for the Soweto giants.

The Citizens then pushed for the equalizing goal and they were awarded a penalty after Thabo Nodada was fouled in the box.

Mduduzi Mdantsane then stepped up and beat Swallows goalkeeper Thela Ngobeni from the spot-kick to make it 1-1 just after the half-hour mark.

The score was 1-1 during the half-time break in the Mother City.

The Beautiful Birds attacked in numbers after the restart as they looked to restore their lead, but they suffered a blow when Junaid Sait was sent off.

The 27-year-old player received his second yellow card of the match and Swallows were reduced to 10 players six minutes after the hour-mark.

Swallows head coach Brandon Truter reacted by introducing a defender, Sipho Sibiya, as the visitors looked to contain City in the latter stages of the game.

The two teams launched attacks, but they were unable to find a late goal and the game ended in a 1-1 draw on the day.

Meanwhile, Tshakhuma Tsha Madzivhandila (TTM) made it three wins in a row across all competitions when they edged out Stellenbosch FC 1-0 at Thohoyandou Stadium.

Vhadau Vha Damani took the lead on the half-hour mark through Thembisani Nevhulamba, who had been handed a rare start by coach Dylan Kerr.

The 35-year-old marksman fired past Stellenbosch goalkeeper Sage Stephens with a decent finish to make it 1-0 to Tshakhuma – scoring his second goal in five league starts.

Tshakhuma were then able to contain Stellenbosch and the hosts were leading 1-0 at the interval.

Dean Van Rooyen, who is an attacker by trade, was introduced by Stellenbosch head coach Steve Barker prior to the start of the second-half.

The former 24-year-old player sent Ashley Du Preez through on goal and the latter was denied by Washington Arubi in the Tshakhuma goal-posts.

Arubi was a busy man in the closing stages as he reacted quickly to gather the ball before Du Preez could pounce and snatch a late equalizing goal.

Ultimately, Tshakhuma emerged 1-0 winners and they remained 14th on the standings, but they are now level points with 13th-placed Stellenbosch.

Flamengo vs Internacional: How to watch Brasileirao Serie A matches

Sun Feb 21 , 2021
Inter can be crowned Brazilian champions with victory over the Mengao in Sunday’s title blockbuster The Campeonato Brasileirao Serie A is the top level of soccer in Brazil and has been the breeding ground for some of the world’s greatest players including Pele and Neymar. All games are live streamed […] 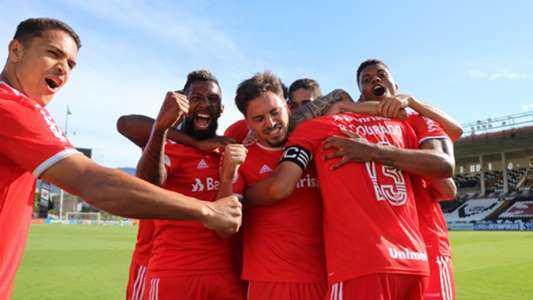